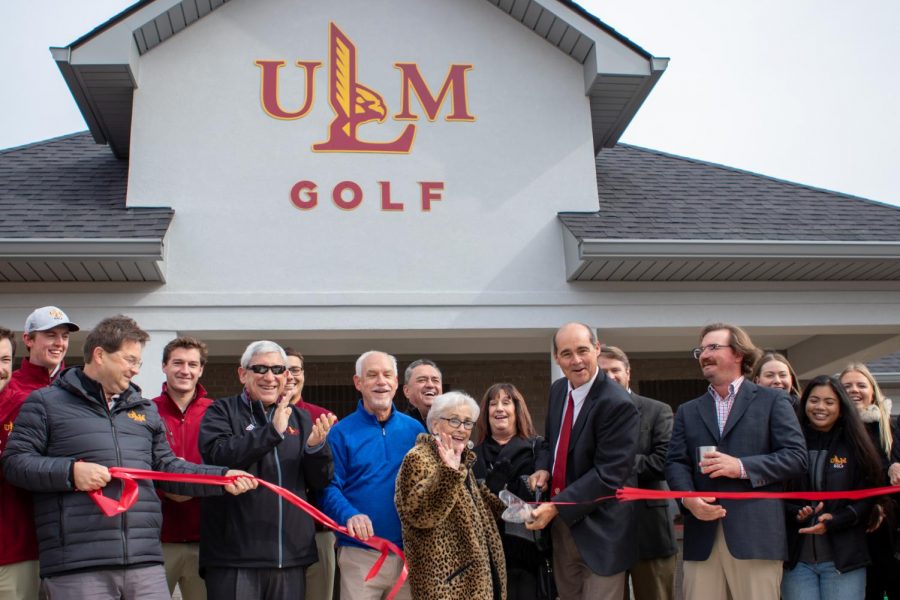 Six months ago ULM golf announced the plan to upgrade its facilities by creating a facility for the golfers to practice.
That place is now open as on Nov. 8 the Wally Jones Golf Complex was officially opened.
The complex is named after the late Wally Jones who was a former professor at then-Northeast Louisiana University and the former golf coach.
As of Ken Buchan, a former player under Jones, Jones is the founding father of ULM golf.
“He was instrumental in getting the local golfing community involved in supporting NLU/ULM golf, which has been critical to the program’s success and survival over many years. His support for ULM golf continued long after he stopped coaching, which we are all grateful for,” Buchan said.
Each year the golf team also honors a team partner with an award named after Jones.
The $800,000 facility is a state-of-the-art complex was funded completely by donations to the ULM foundation SOAR campaign.
The complex is located between Brown Stadium and Warhawk field and can be seen from Warhawk field.
“We are very excited about the new Wally Jones Golf Complex and what it means for ULM Golf. Our players, coaches, administration and the golf community have an exceptional place to call home,” golf director Tim Baldwin said. “Our recruiting has taken a major step forward. This complex, coupled with our Selman facility and support of local country clubs, will attract high-quality student-athletes to ULM.”
The complex includes three coaches’ offices, men’s and women’s locker rooms, guest restroom, three storage rooms, kitchen and players’ lounge.
It also features an indoor 1,000-square-foot, state-of-the-art SAM PuttLab and TrackMan Golf Simulator, as well as an outdoor covered tee area.
The complex does not end there as it also includes a 6,000-foot tee area and five target greens ranging from 50-165 yards.
There are plans to add more to the complex including a chipping-pitching green, bunker and putting green.
“Our golf community is very special and close, and I think this is a tribute to Wally,” Baldwin said. “He actually recruited me back in 1983 when I was a high school senior in Michigan. I signed with Southeastern Louisiana University, but even as a player at a competitor school, he was always very nice to me. Wally was very happy when he heard I was coaching at ULM.”