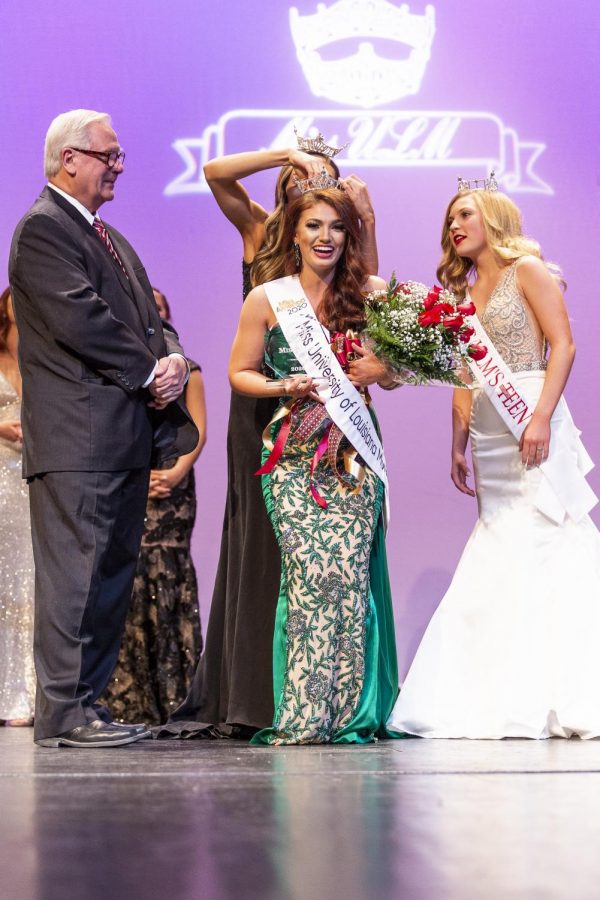 People cheered all across Brown Auditorium. Allison Newton’s face glowed as she accepted a bouquet of red roses and a silver crown. At the 67th annual Miss ULM, Monica Whitman, Miss ULM 2019, crowned Newton Friday, Nov. 15, Miss ULM 2020.
After competing four times, Newton received the title she had always dreamed of. For the 13 other candidates, the pageant was a push out of their comfort zones.
Asja Jordan, the first runner up of the Miss ULM pageant, said she was beyond her comfort zone.
“I firmly believe when we challenge ourselves in unfamiliar ways, that’s when we grow most as individuals,” Jordan said. “I wanted to just get as much personal growth and professional development as I could from this.”
Jordan tied for Miss Congeniality with contestant 14, Brooklyn Nolan, and received a $2,000 tuition scholarship for two semesters from CAB.
With the help of CAB, SGA and many others, Meagan Lee, a coordinator for Student Life and Leadership, said Miss ULM would not have been possible.
Unfortunately for Lee, there were unexpected incidents that happened before and during the show like two of the judges getting in a car wreck. Lee said everyone was okay, but without her support system, it wouldn’t have run as smoothly as it did.
“It truly took the work of everyone involved—from the candidates to backstage crew to the emcees and performers—to overcome the hurdles and still pull off a success,” Lee said.
To many like Alise Stephens, an attendee and freshman health studies major, the overall show was a success. Stephens said that the evening wear was her favorite part of the show because of the beautiful dresses. According to Lee, this pageant was more than beautiful women in beautiful dresses.
“It’s important to campus because it helps us cultivate leaders in our female students who take part in this organization,” Lee said. “As a former university titleholder, I know just how impactful the job is for those encompassing the university’s community as well as the young lady wearing the title.”
According to Lee, the Miss ULM competition is one of the oldest traditions and largest events on campus and it gives scholarship opportunities to the women who compete.
Emily Healy was the second runner up and received a $2,000 tuition scholarship for one semester from CAB. Third runner up was Julia Williams who received a $1,000 tuition scholarship for one semester from CAB. The fourth runner up was Ambria Terrell who received a $750 scholarship from CAB.
There were other competitors who received scholarships for awards like the People’s Choice Award, Social Media Contest Winner and Non-Finalist Talent Award.
According to Whitman, the title isn’t what is most important in being Miss ULM—it’s being able to serve the campus.
“This job has meant the world to me. Not only did I want the title of Miss ULM 2019, but I wanted the job,” Whitman said. “I wanted to serve the campus…that gave me so much.”
Jordan said that even though she didn’t receive the title of Miss ULM 2020, the pageant taught her valuable lessons.