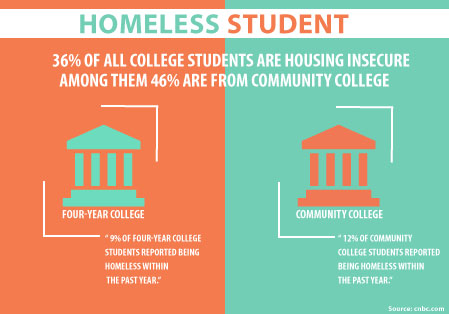 When we hear the word “homelessness,” most of us associate it with living off of people’s trash, sleeping under bridges and waving tin cans at people for change. However, homelessness is a harsh reality for some college students.

It is a taboo situation that most college students are ashamed to admit. They suffer through the vulnerability as they try to finish college to become resourceful members of the community.

Students should be able to pursue their respective careers without having to worry about where they’re going to sleep at night.

Even students that are able to secure housing are stressed, because they have to worry about how they will pay their rent or housing fees.

This is called housing insecurity, and most international and out-of-state students go through this at their respective colleges, especially toward the end of the semester.

According to Best Colleges, housing insecurity is even more common among students at 2-year institutions, with 46% of those students experiencing it within the past year.

This is a large percent of the student population that is currently concerned about their living situation.

At the end of the spring semester last year, my parents and I did not have a secure housing situation for the summer holiday.

The frustrating situation took a toll on my mental health and my ability to concentrate on my studies.

It wasn’t the lack of housing options, but the fact that staying on campus over break was going to cost almost as much as it does during a normal semester, which neither myself nor my parents could afford at the time.

I was fortunate enough to have it sorted out by the end of the semester with the help of the international students program.

There are many college students who, unlike me, are unable to sort out their situation and they constantly live in fear of ending up on the streets.

Even more critical is the fact that some students currently do not have a roof over their heads while they juggle through this crucial life-shaping phase of their lives.

According to USA Today, public housing authorities are allowed to pick and choose who to rent to when they are low on space, and they usually push college students to the bottom of the list.

A bill has been passed in California, according to Inside Higher Ed, that will allow community college students to sleep in their cars on campus.

It won’t solve the everything, but it will be better for homeless students to stay on campus at night instead of  less safe places off campus.

There was also a national bill introduced in 2017 that would have required colleges to give homeless students more resources and to let them stay on campus over breaks. However, the bill was never enacted, according to City Lab.

There has to be a bill like this to pass. Lawmakers have to push for colleges to change their policies and to help students who desperately need their help.

Only then can we begin to eliminate student homelessness.