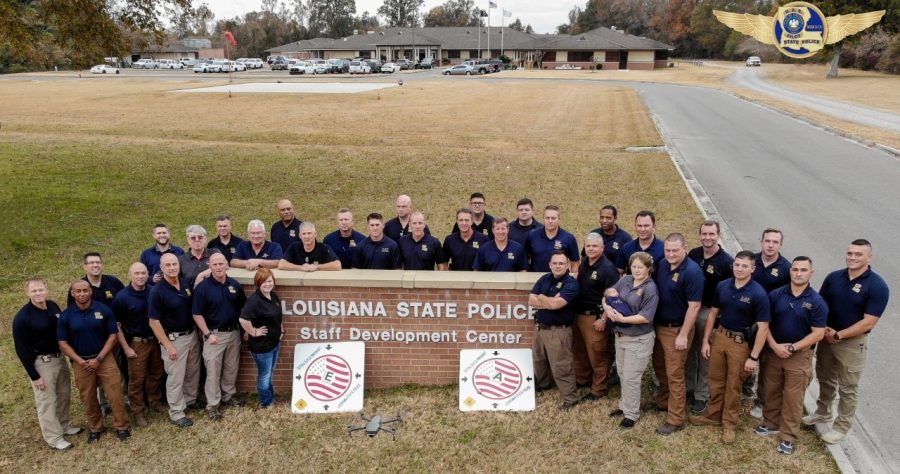 At this point, we all know what drones are. They’re the little flying devices that look like something out of a science fiction movie. In the sky, they look small and harmless, but they’ve been used for years by the military to attack opponents. Now, they’re also being used by law enforcement to catch criminals.

To operate the drones, officials participate in training sessions. One of these sessions was held at ULM last Friday in Hemphill Hall. The students, both officers and first responders, learned valuable information like how to get the best use out of the drones and how to interpret what they see on the screen.

Teaching the session was Cliff Anders, an air interdiction agent from New Orleans Air and Marine Operations. He showed the class examples of drone camera footage and then taught them how to know what they were looking at.

One reason that the footage can be confusing is because it shows no color. The cameras attached to the drones pick up images through heat detections, so just because a car looks like it’s a light color on the screen does not necessarily mean that it is a light color. It just means that the car is absorbing a certain amount of heat.

Anders also debunked some drone myths, informing the officers that despite what you see in the movies, drones cannot see through walls, water or the ground.

Not all police departments have had drones in the past and many are just getting their first ones, like the West Monroe Police Department. Corporal Opie Baker of WMPD said that although coming to the training sessions is not required for him, he is doing it voluntarily to learn how to use their new drone properly.

“With the application of the drone in police work, looking for criminals, looking for evidence, when our SWAT team is deployed, there are just thousands of opportunities,” Baker said.

Learning as much as possible about the technology is important, because things can go terribly wrong if the operator isn’t well-informed. Stephanie Robinson, student and manager of the UAS Research Center who helped organize the session, said that if the drone is not calibrated correctly or if someone is using a cell phone nearby, the machine could fly away.

The senior aviation major also said that drones can be utilized not only by law enforcement, but first responders and firefighters as well. She said she knows of a man on the East Coast who went missing, and firefighters were able to find him with a thermal camera attached to a drone.

Paul Karlowitz, director of ULM Precision AG and UAS Research Center, was also involved in organizing the session. He helped teach the class some things they needed to know for their exam. When they complete the training, and pass the exam, they are then qualified to fly drones for their agencies.

Karlowitz, who is also an associate professor of aviation, said that the training came about purely by chance.