Colleges share experiences, lessons with each other at annual event 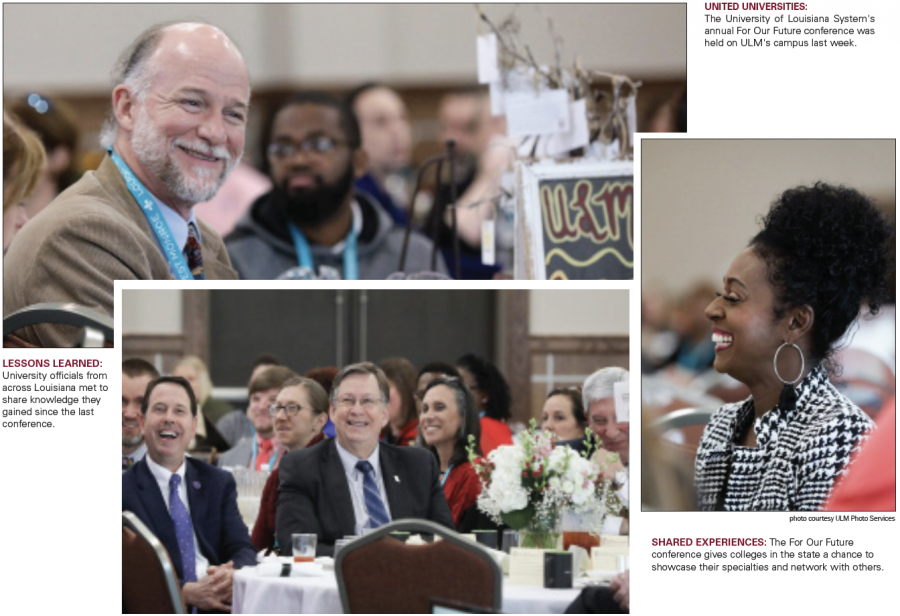 As In the past, the University of Louisiana schools were somewhat rivals, all competing to be the best in the state. Now, thanks to the For Our Future conference, they are becoming united.

The conference is an annual event for UL faculty, staff and administrators. It’s held at a different school every year and this year it was held at ULM.

According to President Bruno, the great thing about the conference is that every year a different school gets to showcase all of its best qualities to the other schools.

“We’re very happy to show off our campus, our students and what we do here,” Bruno said. “It’s important to show not only the physical beauty of the campus, but the quality of our people and our students.”

The conference lasts two days and brings university employees together to share what they know and what they’ve learned with other people in their field. There are keynote speakers as well as professors who give presentations on a variety of topics.

One of these professors was Dr. Anne Case Hanks, the director of the School of Sciences at ULM. She got the chance to give a presentation and show off the school’s VR system. She showed participants a simulated tornado, then spoke about the causes and effects of severe weather.

She also said that her most important takeaway from the conference was that classrooms need to start mirroring the real world. Professors need to start giving students real situations that they will encounter in their jobs instead of just doing the regular lecture, homework, test cycle.

“[Students] have to flounder a little bit, scratch their head. They have to start putting pieces together,” she said.

Those skills are what will help them in their respective careers and she believes they should be taught those skills in college.

The idea for the conference was that of Jim Henderson, the bpresident and CEO of the UL System. He wanted to allow faculty, staff and administration from all nine universities to come together and grow from each other’s issues and challenges.

“When you put smart people in a room together, it’s amazing what can come from that,” Henderson said.

This is only the third year of the conference, and already there have been major improvements. According to Thomas Reynolds, an associate English professor from Northwestern State University, the number of people in attendance has grown tremendously over the past three years and he expects that it will only continue growing. He also said that he has hopes for what could be improved upon in future conferences, such as making room for more presentations on different topics.

“That way everybody gets a shot at showing off their different areas of expertise,” Reynolds said. “Because we’re not all experts in all of these areas.”

At the end of the first day, the participants got a chance to socialize and get to know each other better at a networking reception with music, food and drinks.

Just a few years ago, you never would have expected to see all the different UL schools coming together to learn from each other and have fun. But today, instead of competing, they are uniting to become a stronger system.