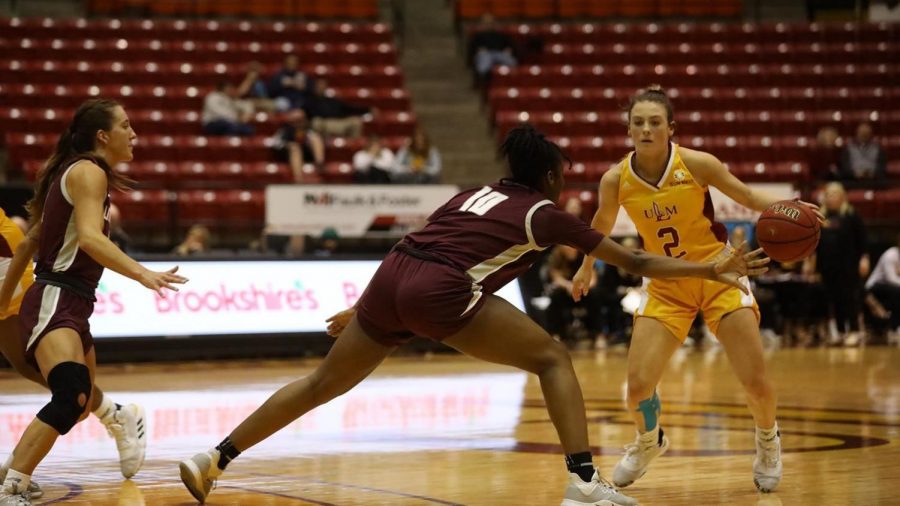 The ULM women’s basketball team was hungry for a win following the team’s three consecutive losses. Unfortunately for them Saturday was not their night.

The Warhawks lost another game in heartbreaking fashion. One point down and less than two seconds left on the clock wasn’t enough for the team to get a shot off.

They lost 54-53 Saturday against the Arkansas State Red Wolves at home.

The team’s loss was only slightly diminished by the strong performances by two members of the Warhawks.

ULM fans saw a good game from both freshman Gara Beth Self and junior Whitney Goins. Self led her team in scoring with 17 points followed by Goins who had 14. Goins also had seven rebounds.

Williams was full of praise for both girls who she said “played a lot of minutes” on both ends of the floor.

The game was a back and forth all night. Both teams kept trying to outdo one another. Arkansas State would pick up a loose ball and score only for the Warhawks to do the same thing later on.

The Warhawks would get close to taking the lead and then fall behind after a sudden downpour of scoring from the Red Wolves. This was evident when Self was able to bring ULM within one only to see Arkansas State hit seven points in a row.

Although the Warhawks were down after the first quarter they recovered on the second quarter. They even took the lead.

They were firing on all cylinders. A three by Goins had them achieving a comfortable lead but you can’t get too comfortable against an opponent like the Red Wolves. ULM was leading 35-24 at halftime but sadly took their foot off the gas.

The third quarter and most of the second half of the game belonged to Arkansas State. The Warhawks were stunned. The first 10 points of the half were all Arkansas. The lead was cut drastically.

It was the beginning of the end for the home team. The Red Wolves recovered the lead and didn’t let go. The Warhawks were forced to play catch up all night.

The third quarter would end up being the deciding factor in the game. ULM shot just 15.4%. In the end, they’d wish they could have made more of the 13 total shots they took that quarter.

The fourth quarter was a back and forth with each team taking the lead various times. Unfortunately, the team would go on to lose the game without having a shot.

Self and Goins continue to form a deadly combination for opposing teams but their production up top still isn’t enough to win games for the Warhawks just yet. The team moves onto a four-game losing streak. Any chance of breaking that streak is up to the team as a whole especially given their some of their shooting percentages throughout the game.

ULM next plays Wednesday at 6 p.m. against Troy away from home.