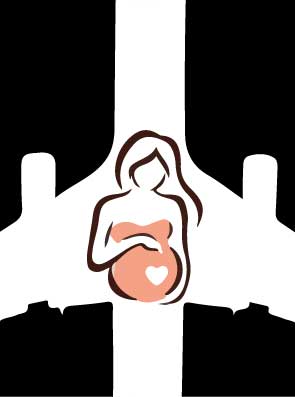 In January, President Donald Trump and his administration announced that they will be restricting birth tourism, which is when women travel to another country for the purpose of giving birth in that country.

Normally, the main reason women have their children in other countries is to obtain citizenship for the child.

With the new rule, pregnant applicants will be denied if they can’t prove they are coming to the United States to give birth for medical reasons or for another compelling reason.

To many, this is just Trump’s attempt to control immigration. Even if it is, it’s smart and safe.

Women should be allowed to travel if they are pregnant to other countries. But it is only safe before 36 weeks. According to Self, a new mom, Nafi Diaby, gave birth to her daughter on an airplane at 28 weeks of pregnancy.

You could end up having your baby on the plane. This could result in major complications and there is nothing you can do because you are in an airplane. So while it’s okay to travel before 36 weeks, any time after that seems unsmart and it should not be done.

Another reason to consider safety is deportation. If women have their babies here in the U.S., they and their babies could be deported. According to Commercial Appeal, there have been more than 2,500 pregnant women detained by ICE in the past three years.

I understand why women have their babies in the U.S. But with the way that Trump is currently handling immigration, it’s unsafe.

There are too many risks for mothers to come to the U.S. with their babies. Until laws of immigration change, women must think about their babies first.

Even if women were wanting to get their babies birthright citizenship, the babies aren’t guaranteed automatic citizenship, according to The Travel. According to the Washington Post, some people are now having their United States-issued birth certificates questioned by the administration for citizenship fraud.

Keep your baby safe. Stay in your country until laws are changed. Demand for these changes to occur. And for those who support these women, help fight for their rights. Contact the Trump administration and let them know how you feel. Start a protest.