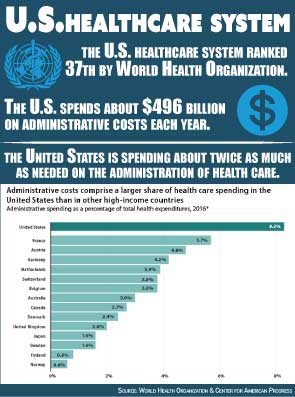 The United States is the wealthiest country in the world, yet it was ranked 37 in healthcare by the World Health Organization.
The citizens of this country pay entirely too much for healthcare and don’t get nearly enough out of it. At this point, our system is hurting more than it’s helping.
If you break your leg, you could end up with a bill of $7,500, according to MIT Medical. And that’s a reason that many Americans avoid seeking medical treatment when they need it.
Medicare is another problem in the healthcare system. They provide health insurance to seniors and those with physical or mental disabilities. But as of 2017, they are not allowed to negotiate the prices of drugs with pharmaceutical companies.
So if a drug is unnecessarily expensive, there’s nothing Medicare can do about it.
But according to the Center for Economic Policy and Research, if Medicare was allowed to negotiate and talk down drug prices with pharmaceutical companies, the government would be able to save $976 billion in 10 years.
While reforming Medicare would majorly improve the healthcare system, RevCycle Intelligence said that administrative costs are at the center of the problem.
Administrative tasks include transferring medical records, sorting insurance bills and filling out intake forms.
According to Time, costs for these things make up about 34% of total healthcare expenditures in the U.S.
Compare that to Canada, who only spends half of that. Researchers looked at costs from 2017 and determined that if the U.S. were to cut spending to match that of Canada, we could have saved over $600 billion in only one year.
These costs could be cut down by switching over to electronic record-keeping and information exchange.
Another big problem is defensive medicine. This is when doctors order multiple tests on a patient even when they are certain of the diagnosis, because they are afraid of being sued.
It is better to be safe than sorry but we also cannot deny the fact that it does have a negative effect on cost.
Everyone pays for this with higher premiums, co-pays and out of pocket costs.
The government’s spending on health care doesn’t only affect a few, it affects everyone in the country negatively and it will only continue to worsen if something is not done.