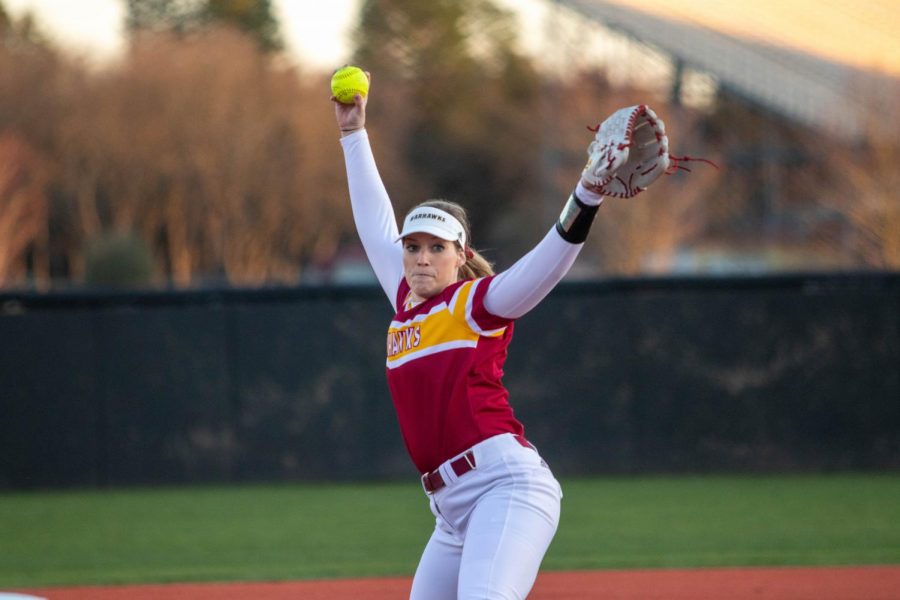 After splitting four games over the week the Warhawks sit at 9-10, closing in on last season’s win total in just 19 games.

The Warhawks opened the week against I-20 rival Louisiana Tech at home, dominating 12-4.

“There isn’t a better feeling than this,” head coach Molly Fichtner said. “Louisiana Tech is a great ball club and to do this at home on television and in front of our fans is incredible.”

ULM will travel to Georgia Southern to open up conference play.

In just five innings the Warhawks exercised any demons that they may have had with the Lady Techsters.

ULM got the scoring started early as Ana Hogan drove in both Korie Kreps and Jayden Mount to get the early lead.

Hogan would be a major contributor in this game and the week as a whole.

Her three-run home run in the bottom of the fifth would run rule Louisiana Tech.

Against Louisiana Tech, Hogan went 3-3 with two runs, seven RBIs and the homer.

“Ana came in clutch and her hit was big,” Fichtner said.

In the second win of the week, Hogan again came up big.

Against Central Arkansas the two teams battled themselves to a stalemate through seven innings pushing the game to extras.

Kennedy Page, Kreps and Mount would load the bases for the hot batter in Hogan. Hogan would crush a double to center field scoring all three runners.

“Those are the hits that we have to have to win these types of ball game,” Fichtner said.

The Hogan double would be enough for the Warhawks to get a win after it dropped the first two games after leaving Monroe.

Riding the momentum of the beatdown of the rival Lady Techsters the Warhawks had a winnable game against the struggling Belmont, who to that point had just one win.

Belmont would act as the perfect trap game for the Warhawks.

ULM started the scoring early again netting a run in the second inning before taking a 3-1 lead after two runs in the top of the third.

Heading into the final frame, needing just three outs the Warhawks lead 5-2 after Hogan drove in Kreps on a sac fly and Alysia Anderson scored on a series of errors.

A single followed by a homerun cut the Warhawk lead to just one. A fielder’s choice than a double would tie the game for Belmont.

ULM would not be able to close the deal as a Jessica Parente single would win it.

All momentum would be gone for the Warhawks against SFA who would have their way with the Warhawks dominating 11-2.

ULM has been outscored 31-4 in three games versus SFA this season.