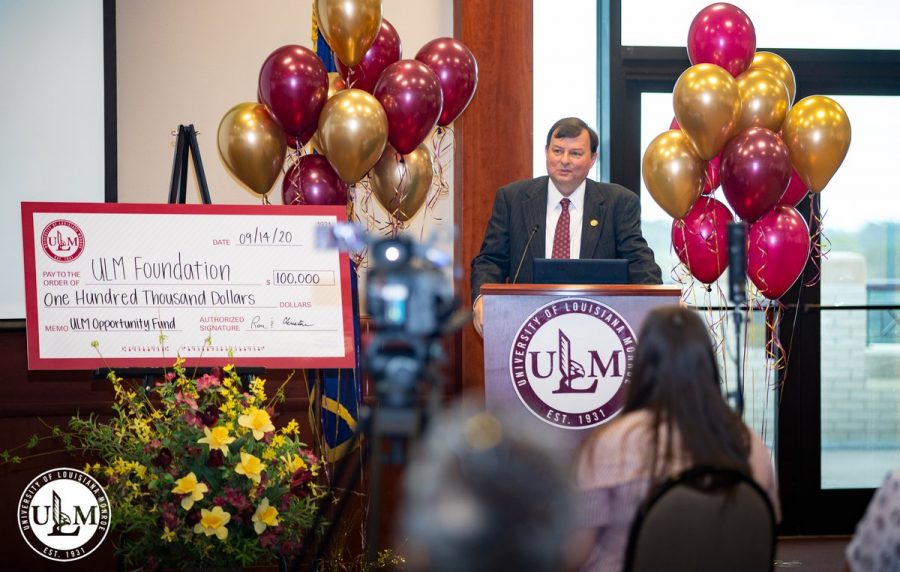 On Tuesday morning, the week before Ronald Berry took office, he walked into his office and found a check on his desk for $100,000. The accompanying note said: “I want to make sure ULM’s new president gets off on the right foot.”

The check was a donation to the ULM Opportunity Fund, which was created by Ron and Christine Berry.

On Berry’s first day in office, a press conference was held so the Berry family could announce the establishment of this new fund and explain its purpose.

Kelsey Bohl, executive director of marketing and university communications, gave some examples of what the fund will be used for.

“It will be used for programs that support diversity, equity and inclusion, tuition assistance for faculty and staff pursuing graduate studies, and the development of leadership programs for students, faculty and staff,” Pole said.

Christine Berry took the opportunity to speak about the future of ULM. She said that we have to start doing more to help students engage and succeed before, during and after college. She also said that it’s going to take more than money to accomplish this.

When the Berry family created the fund, they made a personal commitment of $100,000.

So, when that check appeared, they asked themselves, “What do we do now? We’ve already met our goal.”

Berry’s answer to that question is, “Dream a bigger dream.” He said that they will not simply stop raising money because they met their goal. They will just make their goal bigger.

Berry said that the money is not just about paying tuition, creating leadership programs or getting students to come back once they leave.

“Today, we announce this gift not because we wanted to give a bunch of money to the university,” Berry said. “We want to change lives.”