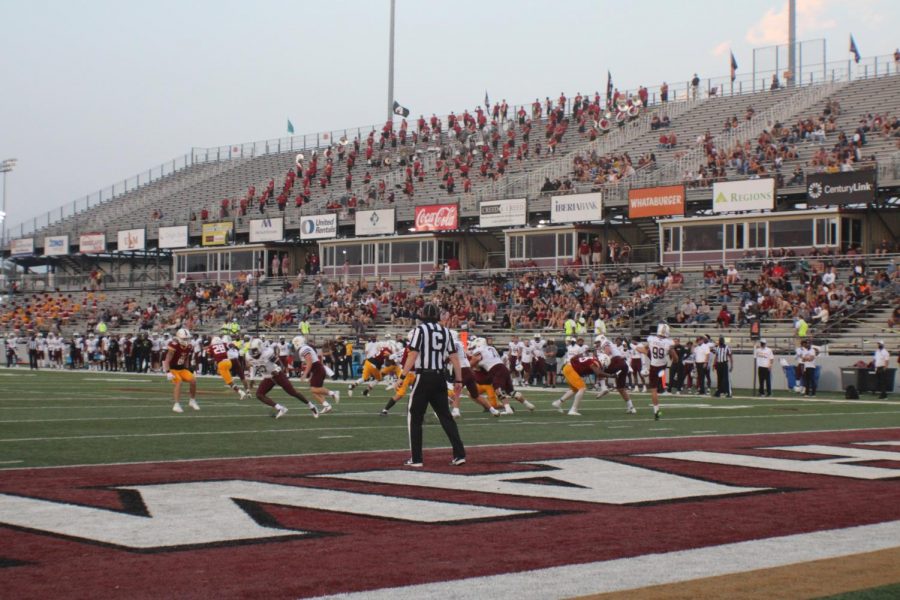 The first half of Saturday night’s game saw an opportunistic Texas State football team capitalizing on a Warhawks team that was inefficient with their possessions.

The second half would be another slow start for the Warhawks, as they would go three and out once again on their opening drive.

“Really frustrating game for us,” Matt Viator, head coach, said. “Defensively, I thought we hung in the second half and kind of gave us chance. Gave up too many big plays in the first half.”

Texas State scored on their opening possession after a 10-play, 85-yard drive. ULM would punt on its first drive but would force a three and out on the subsequent Texas State drive. The offense would make its first trip to the end zone with Colby Suits completing a 20-yard pass to wide receiver Jevin Frett.

The Bobcats would go on to score 17 straight points. Warhawks special teams recovered a punt dropped by the Bobcats return team but would fumble on the first play of the drive.

The Warhawks would score once again inside the final two minutes of the half. Suits would connect to Chan Whitfield on a five-yard pass to bring the score to 14-24 in Texas State’s favor. The Bobcats would catch the Warhawks secondary off guard, completing a pass that would go for a 75-yard touchdown.

The Bobcats would fail to get anything sustainable going and would punt on the fourth play of the possession. The following ULM possession would cumulate in a 28-yard field goal. This kick would be the sole score by the Warhawks in the second half.

While the Warhawks offense looked to be competent, it was unable to cap off many successful drives with scores. It became apparent the mantra of the visiting Bobcats was “Bend—Don’t break” as the Warhawks failed to put up any points on three drives that got into scoring range. The Warhawks also struggled to keep pace with Tyler Vitts’s dual-threat attack.

ULM’s Colby Suits would go 33-52 with 377 passing yards, and his lone interception being a 100-yard pick-six within the final minute of play. Meanwhile, Texas State quarterback Tyler Vitt would go 14-21 with a pair of passing touchdowns. Vitts would also lead the Bobcats in rushing with 82 of the teams 142 total rushing yards and an 8-yard rush for a score. ULM’s Josh Johnson would be limited to 51 yards on 17 rushes, with a team total of 67 yards. With the Warhawks playing from behind the entire game, a consistent rushing attack was unable to develop.

On the defensive side, linebacker Travei Webster and safety Austin Hawley would lead the team in tackles with eight each. The Warhawks were able to get nine tackles for a loss. Linebacker Keilos Swinney would also force a fumble.

One positive takeaway for the Warhawks was their offensive line, namely the pass blocking. Suits was sacked just twice despite frequently facing extra rushers.