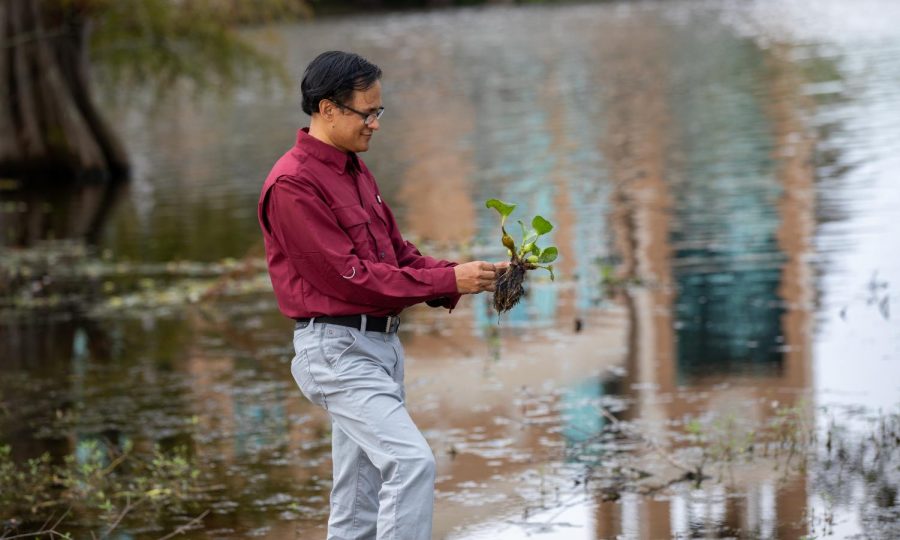 After a day of playing outside, Joydeep Bhattacharjee’s mother hoses him off before he’s allowed to come inside. It’s a daily occurrence for him, a child infatuated with nature. The Himalayan mountains are his backyard, and he spends every second he can outdoors.

Today, Bhattacharjee has a PhD in ecology and is a ULM professor. He has earned ULM its first EPA-EE grant in over 15 years.

An EPA-EE is an environmental education grant. Out of the 300 applicants in region 6, which includes five states, there were only three recipients.

And out of those three, ULM was the only educational institution. The others were nonprofit organizations.

Kevin Baer, a toxicology professor, is the grant’s co-principal investigator. He’s been conducting water quality monitoring for 20 years, and he helped design activities to teach the kids how to monitor water quality.

According to  Bhattacharjee, Baer has been important in the formulation of the research plan, especially when it comes to monitoring pollutants in our wetlands. The two have worked together on research for several years, and have formed a friendship through their collaborations.

Bhattacharjee has received grants before. According to him, he’s rounded up over half a million dollars in educational grants in his time at ULM.

However, this is his first time receiving a federal grant. It totals $133,720, and is going to be used to teach high school students environmental awareness through hands-on research.

Saswati Majumdar, an adjunct professor at the college of arts, education and sciences, served as the senior science education personnel for the grant.

on grants with Bhattacharjee before. She said that his expertise in ecology and hers in science education have “significant overlap.”

She helped in the planning

process by figuring out how they were going to reach out to schools and find the sites for conducting research.

The plan is to teach kids about the environment through student-teacher teams in local schools.

“In the current context of a global climate crisis, this grant would enable us to help teachers and students connect their curricula with the local environment,” Majumdar said.

Bhattacharjee said that the main goal is to catch their attention. Reaching out to young people is especially important because you’re able to help mold their minds, and help them figure out what they’re interested in.

“Those are the foundational years where you really develop a liking for a subject,” he said.

Usually in science class, you’re learning about faraway places, places you don’t really have a connection to or an interest in. But taking students out into their own backyard and teaching them about it peaks their interest. It gets them to wonder what’s going on in their own surroundings. 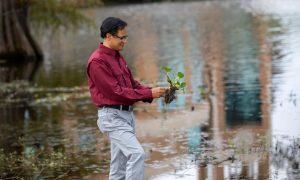 Majumdar said that this kind of research is important because it gets students to engage with what they’re learning and it connects them to the place they live.

The students will have the chance to test water quality and collect data. They’ll learn how to reduce erosion and catch contaminents from running into the bayou.

Schools without a nearby wetland or body of water will get to make a functioning rain garden.

According to Bhattacharjee, the next six to ten months will be spent making sure the places they’re planning to conduct research are safe for the students.

As of now, they’re not allowed to visit schools because of the pandemic. However, they’re hoping to begin interacting with students next fall.

Bhattacharjee is enthusiastic about the future, even if it takes a little longer than expected to get there.

“I enjoy doing what I do so much that it doesn’t feel like work at all,” Bhattacharjee said.