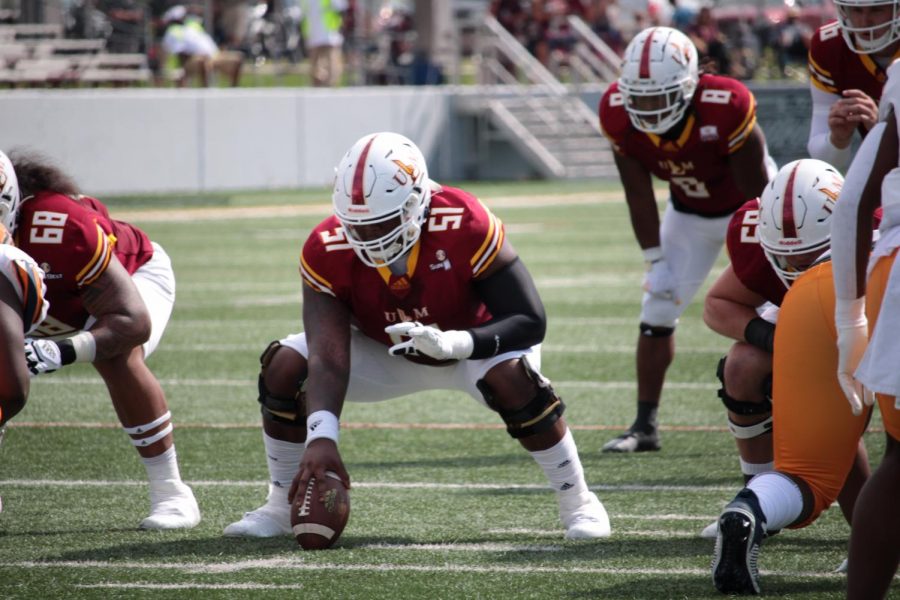 The ULM Warhawks were no match for the visiting UTEP Miners in their first-ever meeting. The Miners breezed through the game to a 31-6 win in Malone Stadium.

The first half was a dominant display by UTEP. The Miners from El Paso had five chunk plays of 20 yards or greater while holding the Warhawks to only two first downs. UTEP’s explosive first half would see them post 330 total yards of offense. UTEP Wideout Jacob Cowing had 104 receiving yards on only three grabs in the first half. The Warhawks receiving corp would have a combined 73 yards in the air after two-quarters of play.

Their sole redzone trip was cut short when QB Colby Suits threw an interception in prime scoring position. This was after Suits completed a 49-yard deep pass to wide receiver Jevin Frett. The Warhawks would not see another offensive first down in the first half of play. The score at halftime was 24-0 UTEP.

The second half would start with junior QB Jeremy Hunt taking over the offense for the Warhawks. This would be short-lived, as Suits would return after two three and outs.

UTEP was marching into scoring range late in the third quarter but cornerback Kendrick Marbles would come up and force a fumble which would be recovered and partially returned by safety Keilos Swinney. With Suits returning to lead the offense, ULM made quick work of good field position, connecting to Jahquan Bloomfield for a 35-yard touchdown. Special team woes would return as kicker Zach Elder would miss the subsequent PAT pushed back by a penalty acquired on a two-point conversion.

The Warhawks failed at finding any offensive consistency with six of their 12 drives ending in a three and out.

The miscues and lapses on the defensive end would be capitalized on at every opportunity by the Miners. UTEP QB Gavin Hardison would finish with over 300 passing yards and is responsible for two 100-yard receivers, Justin Garrett and Jacob Cowing. Running back Deion Hankins would finish over 100 yards to go along with three touchdowns on the ground in the first half.

The Warhawks defense would rack up a total of 81 tackles with Travei Webster and Jabari Johnson leading the team with nine each.

This team continues to struggle with nearly all aspects of the game.

“[The team] had a lot of opportunities but we need to capitalize on third down. We still have nine games left, we could go 9-0,” said defensive back, Jabari Johnson.

Despite the woes today, Johnson remains optimistic about the season.

After three games, the Warhawks have not led an opponent for a single second. It’s likely to see this downward trend continue next week against a Georgia Southern team that is bitter after nearly upsetting 19th ranked ULL.