Students get creative with paint, pretzels 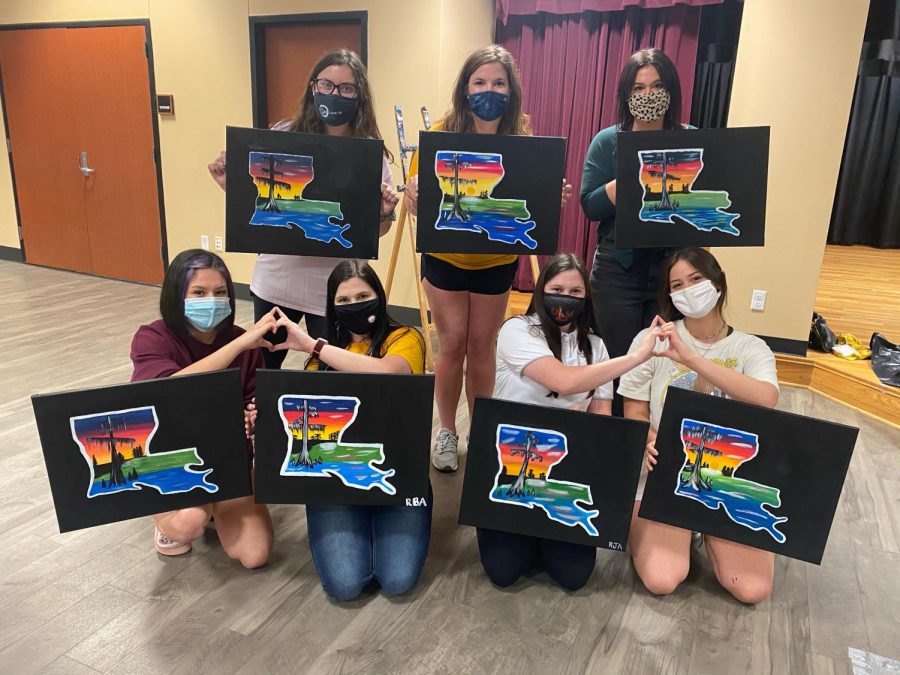 Students chatted excitedly as they lined-up in the hallway of the SUB Hangar hoping to be among the 50 students that were admitted into the Painting with a Twist event held during homecoming week.

Once Painting with a Twist started, students were given everything they needed to paint, including a white canvas with a sketch of Louisiana on it. Students were able to walk home confidently with paintings of the sun setting on the bayou that they created themselves as they listened to music and ate pretzels

Kathryn Irvin, senior political science major, organized this event as a part of the homecoming festivities. She said that this was an event she had discussed with Joel Sinclair, CAB advisor, last semester. But due to the pandemic, they could not hold the event then.

“I thought this would be a great idea for homecoming since this year’s theme is ‘Together We Rise,’ and we all rise together as one. The event was such a success that next time, we would have to make it bigger so it could include more students,” Irvin said.

Irvin also said she thinks CAB would include more crafting events like this that help students explore their creativity.

Ja’mya Walker, freshman pre-nursing major, said that she thought the event was a great idea for homecoming because it creates a platform for students that like to paint but do not want to show it, to paint while remaining anonymous.

Throughout the event, members of the Painting with a Twist studio and CAB walked around helping students by refreshing their drinks and providing guidance whenever they were stuck on any stage of the process.

“I think CAB did a good job promoting the event, although they could have sent it out in an email. But doing the event in the evening was a great idea since most students would be done with classes and could attend if they wanted to,” said Diamond Green, freshman prenursing major.