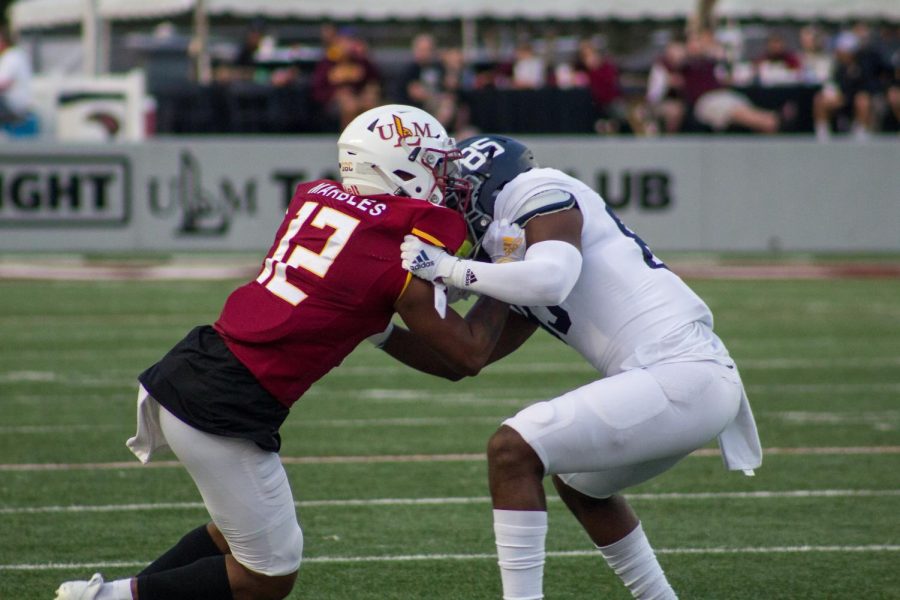 ULM hosted the Georgia Southern Eagles this Saturday for homecoming. Although it was an incredible display of football, the Warhawks would be on the losing end but just barely.

Late in the 4th, ULM’s defense would stop the Eagles on 3rd and short, forcing a punt. The drive would start with 2:37 left and the Warhawks trailing by five. Facing 3rd and 10, Colby Suits was able to find wide receiver Jevin Frett to keep the drive going. Suits would get a vital rushing pickup on the next play. With pass protection opening a gap and all of the Eagles defense dropping back into coverage, Suits would take off towards the endzone as time ran out. Unfortunately, after a long review, he would be deemed short of the endzone.

Coach Matt Viator said that he “couldn’t be prouder of the guys on both sides of the ball,” and that he has never been in such a close game in his career. Despite being 0-4, this team is finally showing strides of being a complete football team. ULM could be a team to watch for in the following weeks.

After quickly finding themselves down 7-0, the Warhawks seemed to take their game to another gear. The Eagles failed a 4th down conversion near midfield, and the Warhawks were able to get into scoring range. Josh Pederson caught a tipped pass that allowed kicker Davis Hughes to put ULM on the board. Georgia State would score on the next drive, but ULM’s offense would answer back with a touchdown of their own.

Running back Josh Johnson would break free on a 26-yard rush to the end zone. This back and forth trend would continue with the visiting Eagles putting together an eight-minute, 15 play drive for 75 yards resulting in Wesley Kennedy’s second score on the ground.

The Warhawks felt a sense of urgency getting the ball back under two minutes and trailing by 11 points. Viator would opt to go for a 4th and 7 to keep the drive alive.

Again, Viator decided to pass up the chip shot field goal with three seconds on the clock. This decision would prove to be the right choice as QB Colby Suits would connect to Malik Jackson from two yards out.

The score at the half was 21-17 Georgia Southern.

This game showed the most complete game of football all season for ULM. Suits would connect for 334 passing yards with another 51 on the ground. He would complete passes to 10 different players and a total of two passing touchdowns. Safety Tyler Glass led the defense with 10 of the team’s 77 tackles. While the Warhawks only converted on 5 of 15 3rd downs, they were a perfect 5 for 5 on 4th down.