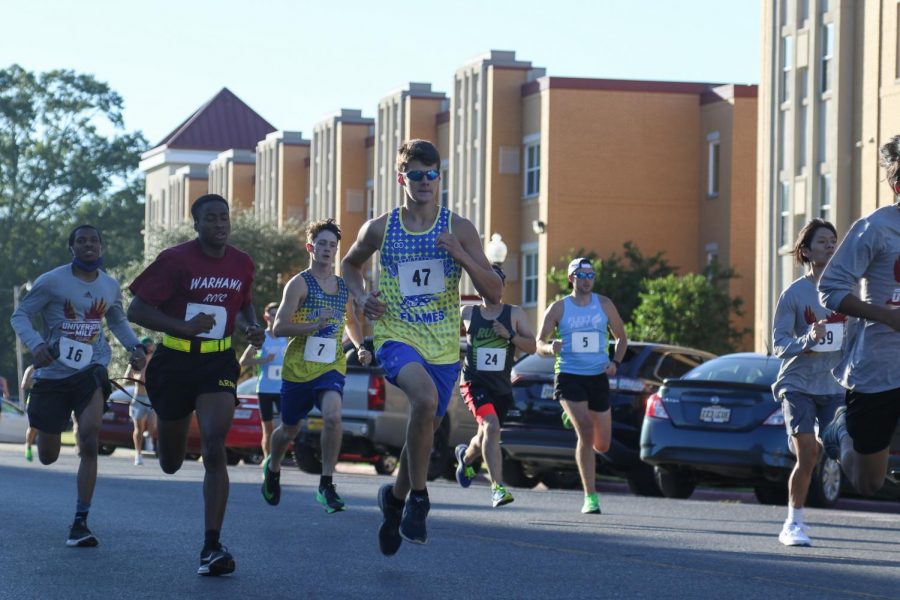 “Youth is a beautiful thing,” Mr. Steve Redding said, as he watched his granddaughter return from the finish line. “This is the first time I’ve been to this event. There is a lot of people, more than I expected. First time I have been on campus in 25 years and there was a big turnout.”

Students, faculty, staff and community members came together to run the race. It started at Hemphill Hall and ended at the Activity Center.

Everyone who signed up received an Adidas long-sleeve tee. After the race, an award ceremony was held at the finish line.

People of all ages attended the event and runners supported each other through their shared love of athletics.

Mile-runner and freshman Alec Pitney said, “I used to run in high school. Now I just run casually around campus. I didn’t get to run the Shamrock 5k last year so I figured running this one could make up for it.”

Camile Currier, founder of the mile run, managed ULM’s track and cross country teams for six years and is the former Vice President of Student Affairs.

Recalling his inspiration for starting the University Mile, he said, “I was watching the 5th Avenue Mile that was ran in New York with 10,000 people on T.V. I said ‘We can do that!’”

Soon after, he created a community run of his own. He said the run went down Louisville Avenue, so they called it the Louisville Mile.

Their race was sponsored by Miller Lite, and they’d run at the same time the homecoming parade was happening. After the race, everyone would get free beer.

“When they quit doing the parade on Louisville Avenue, we brought it on campus and called it the University Mile,” Currier said. “I hope I’m around for the 50th!”