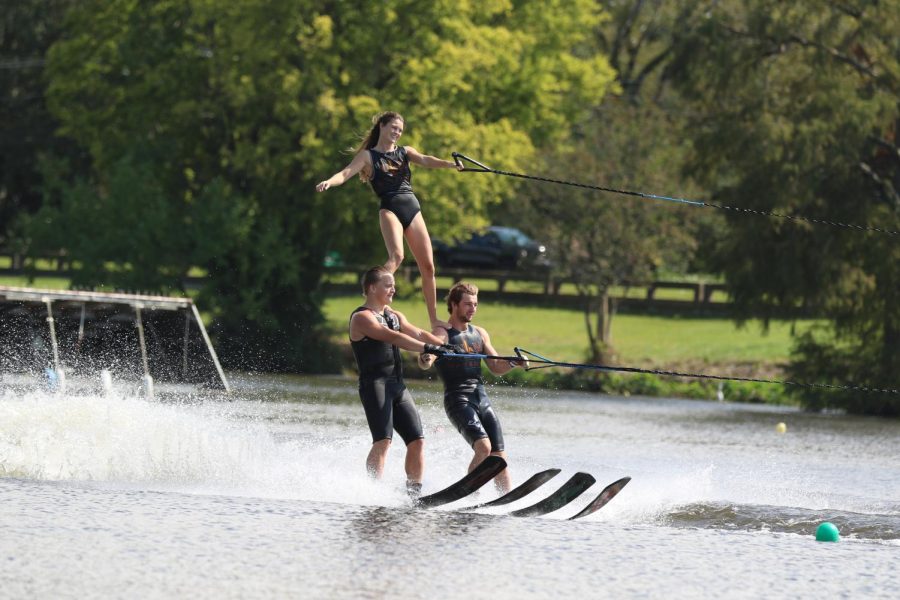 It’s no secret that ULM has a great water ski team. They’ve won 29 National Championship titles, and last Monday the team showed off their water skiing talent once again.

The water ski team held a show for everyone on the bayou. This show is usually an annual event, but due to the construction of the VCOM medical building, they were unable to host it last year.

The team is excited to be back on the bayou and hosting water ski events.

The team worked on ideas and prepared for the event for two weeks. The water skiers had a team meeting to discuss stunt ideas.

The team’s coach, Michael Woodgate, printed signs and t-shirts and created social media promotions for the show. Team co-captain, Amanda Bryans, made a schedule to keep the show running smoothly.

“Our team is very involved,” Bryans said. “Everyone gladly accepted a job to do, which was the main reason I think the show went so well. It was a great event to get us all working together.”

But this two-week preparation time for the show doesn’t compare to the many years of training the team members have had to endure to get this far in their water skiing careers.

“Everyone on our team grew up on the water, most from the age of five or younger, so we’ve all had some degree on performing stunts,” Bryans said.

The stunts and jumps the team had to learn for the show came easily because of the years of hard work and dedication it has put into competing.

Junior psychology major and water skier, Dominique Allard, explained that the team did some jumps that they usually do for competition, but also threw in some fun stunts.

“The tricks like the pyramid or the human handle or two people over the ramp, we don’t usually do that,” Allard said. “We just wanted to put on the best show possible!”

The students and members of the community that came out to support the water ski team were amazed at the different stunts they performed.

The crowd favorites were the multiple trick skier stunts and the human handle.

Team member Garrett Stallings was overwhelmed by the amount of students that went to the show.

“I was really pleased to see the support that we received from VCOM and the student body,” Stallings said. “It makes me feel grateful to be able to compete for a university where we are recognized and appreciated not only by the employees, but also by the student body.”