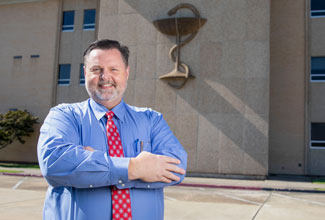 As a North Louisiana native and first-generation college student, there was no way for Donald Simpson to know the places his career would take him. In Namibia, he led a project to develop a biomedical services program. In Saudi Arabia, he developed licensed curriculums in medical laboratory science and radiologic imaging sciences. He’s worked at colleges in Arkansas, New York and Florida.

Now, over 30 years later, he’s returned as the new dean of the ULM College of Health Sciences.

Before being hired at the university, Simpson held many positions at Lake Erie College of Osteopathic Medicine in Bradenton, Fla. He served as the institutional director of population health and as a professor of pathology at the college of medicine.

He decided to come to ULM because he was looking for a sense of community. He said he found that here, along with a spirit of “all in” loyalty to the university, which he’s never experienced anywhere else.

As for the future of the college under his leadership, Simpson said there will be changes made, because he believes change is necessary and without it nothing can improve.

He said he’d like to form a community advisory board and a student advisory board. He also wants to renovate buildings to improve clinic spaces on campus and to reach out to the community in search of funding for scholarships.

“Many people feel change will have an immediate negative impact on their life or career,” Simpson said. “I believe change is good and even when it seems tough, I know I am learning and growing as a person.”

Despite the pandemic, he has a positive outlook for the future of the College of Health Sciences and is prepared for any obstacles that may arise.

“Challenges are inevitable. When we hit a wall, together we will figure out how to climb it, go through it, or work around it,” Simpson said.

An issue Simpson is particularly interested in is poverty in Louisiana. He said that poverty is both a social and medical problem, and the college can help by developing degree programs, meeting workforce demands and figuring out ways for under-served and underrepresented communities to have access to higher education.

Simpson said he understands it can be easy to become “disenchanted” with higher education, and wants his students to know they can reach out for any reason.

“Above all, I want our students to be seen, heard and valued,” Simpson said.