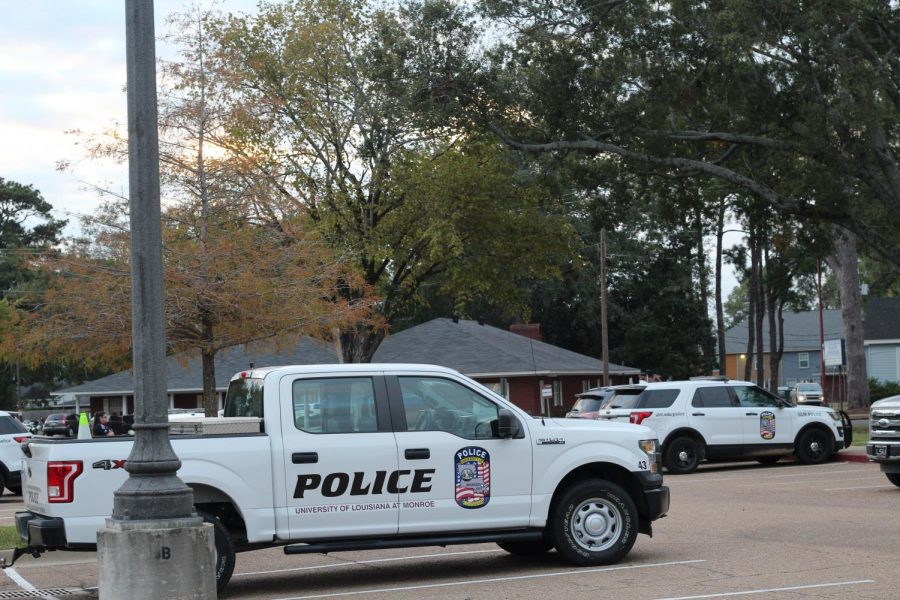 Braylee Dryg was sitting at a picnic table in Bayou Park with textbooks and notes scattered around, studying for her next big test, when she was approached by an older man. Enthralled by her work, Dryg almost didn’t notice him—Until he spoke.

“Do you know where all the college kids hang out,” the non-student asked, holding onto his bike.

His question sent a red flag waving in the junior accounting major’s mind. As soon as she could get away, Dryg notified the University Police Department.

This was the first of many instances of Dryg being approached by strangers on campus. So, she posted about her experiences in the Facebook group, Student to Student at ULM. The group is used by students to openly discuss campus issues and ask for advice. Dryg’s post raked in over 70 likes and comments from other students who shared her concerns for ULM’s safety.

According to UPD, not much can be done in instances like Dryg’s because the university has an open campus policy where non-students are allowed on the premises. However, UPD Director Tom Torregrossa encourages all students to report suspicious persons anyways.

“The ULM campus is a safe place,” Torregrossa said. “It remains safe because our student population is mindful of their surroundings and have adopted the ‘see something, say something’ mindset.”

A criminal trespass and simple battery were reported to UPD from an apartment complex near campus on Sept. 19.  After the incident, Valerie Fields, the interim vice president of Student Affairs, met with President Ronald Berry to suggest instating residential resource officers as a precaution.

The officers’ duties would include: Walking the corridors in each residential building, meeting with Residential Life to discuss safety concerns, checking all entrances, ensuring all lighting works properly, assisting in parking lot surveillance, following up on all residential complaints and promoting the ULM Safe app.

President Berry agreed that the addition of these officers would “enhance student safety,” and gave the go-ahead to initiate the program, according to Torregrossa.

Destiny Nugent, a junior math major, was also approached by a non-student on campus. However, unlike Dryg, the man was no stranger to Nugent—He was her ex-boyfriend who she feels unsafe around. When she informed UPD about the situation, Nugent said she felt as if they “lacked concern” for the situation.

“When I asked them about students being approached by non-students, there was no concern shown by the officer I talked to. He simply told me ‘It’s an open campus, and shrugged,” Nugent said. “It felt like they told me they can’t prevent anything from happening or do anything unless something does happen.”

Dryg said she feels like the university needs more cameras and lights, especially in the parking lots. At night, many students walk to their vehicles or dorms in fear. Nugent leaves her night classes with her keys gripped between each finger in a defensive manner.

“I feel like there should definitely be more cameras,” Dryg said. “[UPD] are trying their best. I know there are way more students than there are officers.”

In the comments of Dryg’s Facebook post, Meghan Olinger, the assistant director of Event Services, reminded students of the ULM Safe app.

On the app, students can contact UPD easily.  With one simple click, the user’s phone pinpoints their location and dispatches the nearest officer to them.

Olinger is known for helping female students feel safe as she has organized and taught countless self-defense courses on campus.