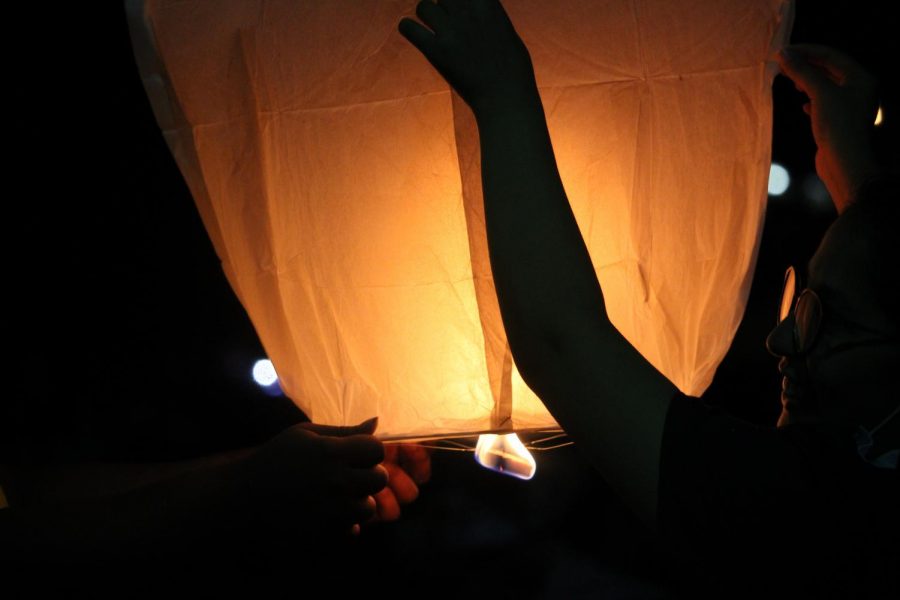 As the sun went down, Warhawks sent paper lanterns with wishes scribbled on them soaring through the sky. The lanterns rose in the air with fire lit beneath them. This was ULM’s way of celebrating the ancient tradition of the Moon Festival.

The Moon Festival, also known as the Mid-Autumn Festival, originated in China during the Zhou Dynasty. Over 3,000 years ago, it was custom in Chinese culture to embrace moon worshipping. The Moon Festival was just one of the many ways ancient Chinese people honored the moon. Today, the festival is observed in many Asian countries, and all over the world.

Each year, the International Student Association hosts the Moon Festival at ULM to intertwine the diverse cultures on campus.

“[The Moon Festival] is a big opportunity for us to come together and learn,” said Raphael Akinpelu, ISA president.

Students, faculty and staff celebrated together by decorating masks, eating traditional Asian foods and listening to music before the lanterns were released into the night sky. A presentation about the cultural significance of and the story behind the Moon Festival was also given on a projector by Vivian Tsai.

Phan Ngoc Tram, a sophomore marketing major from Vietnam, said she found friends from similar backgrounds during the festival.

“It was a wonderful experience and I was able to make new friends,” Tram said. “I thought the event helped broaden the knowledge of students about the Asian culture and I noticed the domestic students really enjoyed it.”

“Although the school, especially the International Student Association, is doing a great job helping the students engage with school and their cultures, we still have a lot of international students from other countries who have not been able to connect with events,” Phan said.

Some similar events hosted by ISA are movie nights, scavenger hunts and ULM’s International Week where students get to immerse themselves in other cultures through food sampling and watching the flag parade.

“It’s great to learn about other cultures, not just American culture,” Akinpelu said. “When someone steps out of their bubble, they get to learn from others. It’s beautiful.”