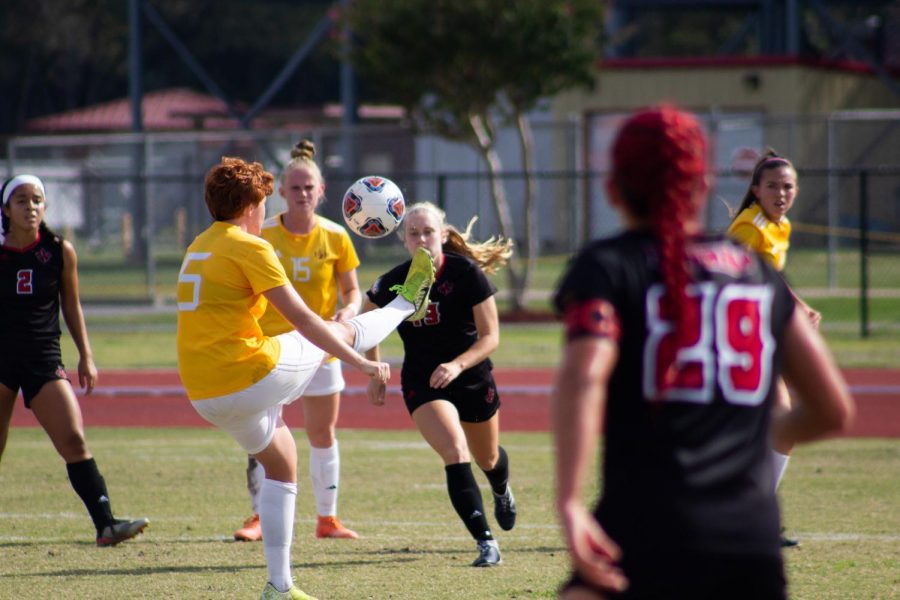 ULM soccer kicked off Senior Day and their last home game of the season against the University of Louisiana at Lafeyette with a hopeful start. But soon, the Warhawks fell to the Rajin’ Cajuns 2-0.

The Warhawks started off strong by controlling the play with many shots and scoring opportunities in the first half. However, they couldn’t turn this early luck into a win.

“A couple of mistakes again have hurt us and these things need to change,” ULM head soccer coach Sean Fraser said. “We cannot keep progressing if we continue taking a back step due to a mistake.”

In the 19th minute, sophomore Madi Garza took a far goal shot from 35 yards.  Unfortunately, her shot bounced off of the crossbar.  Not long afterward, junior Efi Brame fired a shot from nearly the same spot. ULL’s goal keeper Lauryn Starwood leaped in front of the shot and saved the goal.

By the 30-minute mark, ULM and ULL were still tied with zero, but both teams had made goal attempts.

The first goal was scored by ULL five minutes into the second half. The ball made its way behind ULM’s junior goal keeper Hailey Hillock, and ULL took advantage.

ULL quickly doubled their one point lead when Lizzie Mayfield passed to Una Einarsdottir, who shot the ball into the bottom right corner of the goal.

The score remained as 2-0 with five goal shots by ULM and six made by the Cajuns in the last ten minutes. ULL saved all of ULM’s shots from going into the goal, while ULM only managed to save four of the shots ULL took.

The Warhawks did not get many chances to make any good offensive plays after ULL took the lead. All goal shots taken by ULM missed or were blocked by Starwood.

ULM seniors Taylor Altieri and Alexis Cherry were celebrated after the game for their hard work and dedication to the team.

They received gifts from their team and were recognized in front of the game spectators.

“Senior Day is always an emotional one,” Fraser said. “Taylor and Alexis have given us so much over the last few months since we arrived and have been fantastic pioneers as we look to rebuild this program.”