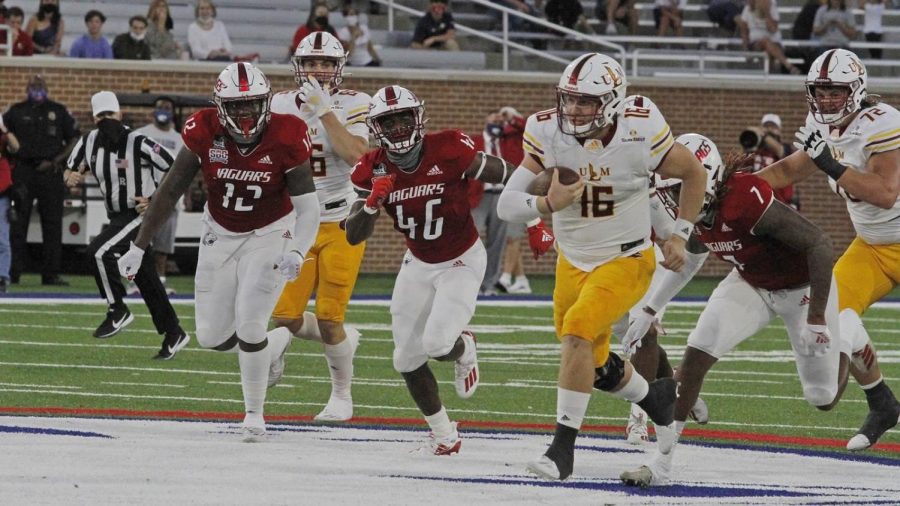 ULM football stays winless after a 38-14 loss at the hand of the South Alabama Jaguars.

This 6-0 start to the season is the worst in Division I FBS football with no other winless team having more than three losses. This loss can be attributed to a few different areas, but the primary area was red-zone efficiency.

The Warhawks opening drive looked very promising. ULM’s defense forced a three and out and the Warhawks were poised to take the lead for the first time all season.

Unfortunately, Colby Suits would throw an interception from the five-yard line that was returned 95 yards for a touchdown. The other error was a missed field goal by kicker Davis Hughes. Hughes would also miss his lone PAT attempt as well.

Looking past Suits’ lone interception, his performance was respectable. He had 282 passing yards and went 22-33 with a touchdown and a two-point conversion.

Running back Josh Johnson struggled this game with a mere 57 yards on the ground. However, he was able to pick up a touchdown on one of his 15 carries. The passing game was balanced on the Warhawks side as three different receivers would have 50 or more receiving yards.

The defensive front was subject to long drives that left the team fatigued. “Defensively, we hung in there, but it seemed like to me we missed too many tackles,” Coach Matt Viator said. “It seems we missed some critical tackles at critical times. It was hard getting them off the field at times.”

Early on, the Warhawks allowed an 80-yard passing play that went for a score.

This has occurred often throughout the season where the defense has given up chunk plays for a score. The Warhawks allowed the Jaguars to convert eight of their 14 third downs, whereas the offense was only able to convert three of 10.

Despite the terrible opening to the season, Traveion Webster has continued to be a bright spot on this Warhawks defense. Once again, he posted double-digit tackles. Junior linebacker Hunter Smith also showed up with the defense’s lone interception.

The defense will be crucial in their next game when the Warhawks host conference rival Appalachian State who is coming out of a 45-17 win.