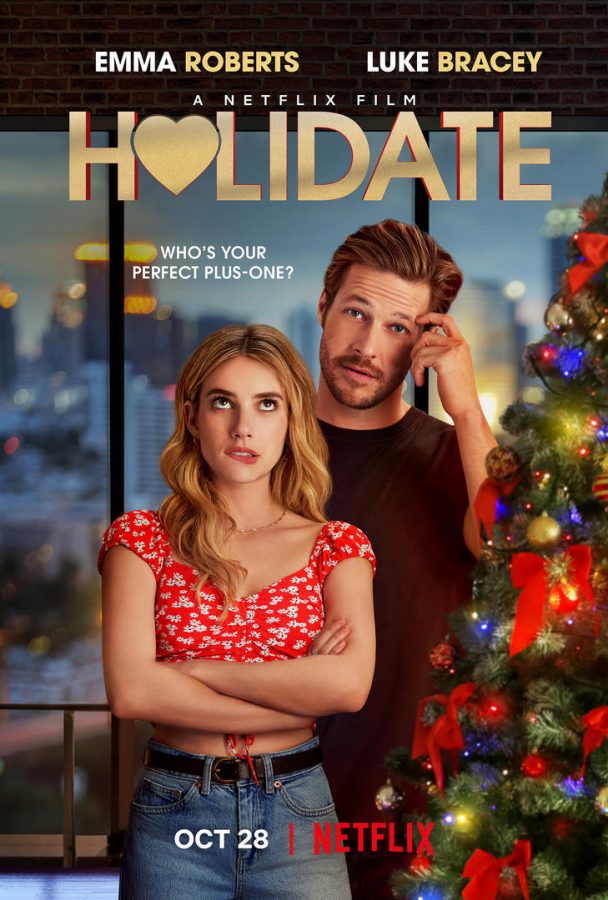 As a huge fan of romantic comedies and holiday-themed movies, I had high expectations for the movie “Holidate.” But I was disappointed not long into the recent Netflix original.

The movie was overall very predictable, and the plot is commonly overused in other movies.

“Holidate” stars Emma Roberts as Sloan, one of the main characters. Alongside her, co-star Luke Bracey played the role of her “holidate” Jackson. The two propose the idea of being each other’s no-romance date for the holidays to avoid all the drama that comes with being single during the holidays.

The difference with this holiday date is that they spend every holiday together, not just Christmas and Thanksgiving. They pretend to be each other’s date for a year of various famous events such as Cinco de Mayo, Halloween and the Fourth of July.

After spending many holidays together, the conflict then begins to arise as the two main characters realize that they want to be together as a real couple. Who would’ve thought?

Dirty jokes are thrown into the plot, and the movie portrays a sense of raunchiness. Almost, like a family-friendly version of “Friends with Benefits.” The movie reminds me of a dirty yet cliché Hallmark movie that I wouldn’t waste ten minutes watching.

The movie includes several sexual jokes and that is when the comedy starts to come in, but it is not the type of comedy I enjoy. I just didn’t laugh like I thought I would.

I had high expectations because lately, Netflix has been releasing interesting movies such as “The Kissing Booth,” that was a fan favorite especially when its sequel was released a few months ago. However, I do hope other viewers enjoy “Holidate” more than I did. I look forward to another holiday movie being released that is not so predictable.