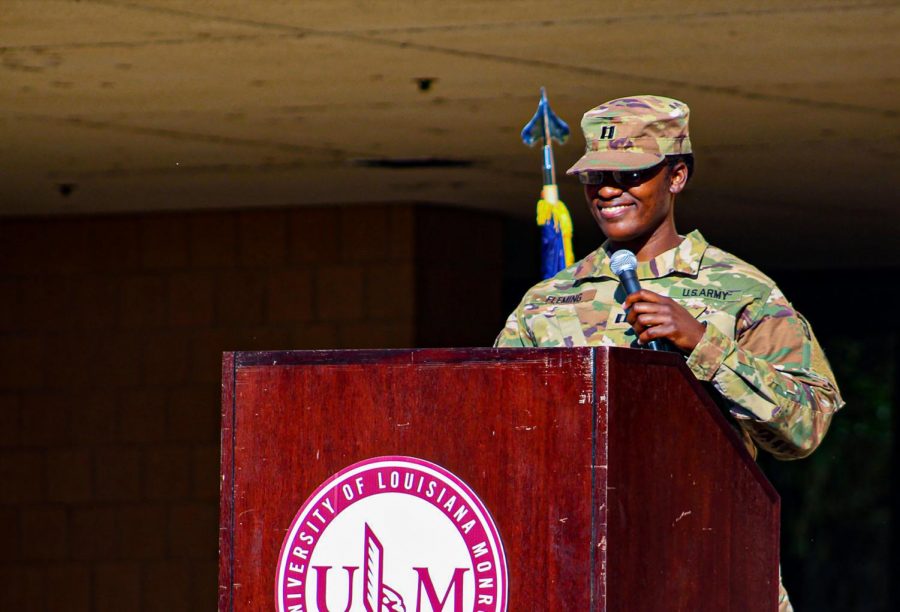 Everyone stood around the water fountain in the Quad on a bright, warm Wednesday afternoon beside a huge American flag and a POW/MIA flag mounted in Warhawk Circle.

Students, faculty, staff and members of the Monroe community were all gathered to honor veterans and those on active duty on Veterans Day.

The event started with the presentation of the colors by ROTC cadets. The Pledge of Allegiance was led by veteran Mark Johnson. Miss ULM, Allison Newton, followed the pledge with a captivating performance of the national anthem.

Ralph Brown, a history professor, was invited to speak on the historical significance of Veterans Day. He spoke about the importance of the military and their love of sacrificing for their country, defending their people and Constitution.

“I have several recent family members as well as ancestors who have served different branches of the U.S. military going back to the American War of Independence,” Brown said. “They were able to overcome difficulty and at times danger, inspiring me to work to overcome the travails of our time.”

Through anecdotes from the life of a veteran, Brown said that the military desegregated long before the rest of America. He said that even though a black person could not go to the movies with a white person, both white and black people were serving side by side under the American flag.

Brown said that veterans who are relatives and students, as well as those who he has interviewed for his research, inspired him to study and teach military history.

Capt. Ernestine, who teaches military science in the ROTC program, emphasized the importance of support and community in the life of any military personnel, especially college cadets.

Treina Kimble, ULM’s special projects officer and Title IX coordinator, is a lieutenant in the Navy. She called the names of the students, faculty and staff that are veterans so they could receive their ULM pin and a commemorative mug.

Luke Crawford, a sophomore criminal justice student, is a private first class. He said that being a veteran gives him a sense of pride in who he is.

“Since joining the military my view of Veteran’s Day has changed very much,” Crawford said. “Now I can better understand the struggles soldiers face when they are away from their families for long periods of time and big holidays.”

“I would say one thing that could better help military personnel would be the ability to find a job. After my deployment, I found it hard to integrate back into normal society without a structured schedule like a steady job,” Crawford said.

Crawford said that he thinks it would be beneficial to veterans and other military personnel to have events on campus where they could all meet and know that others understand them and they’re not alone.