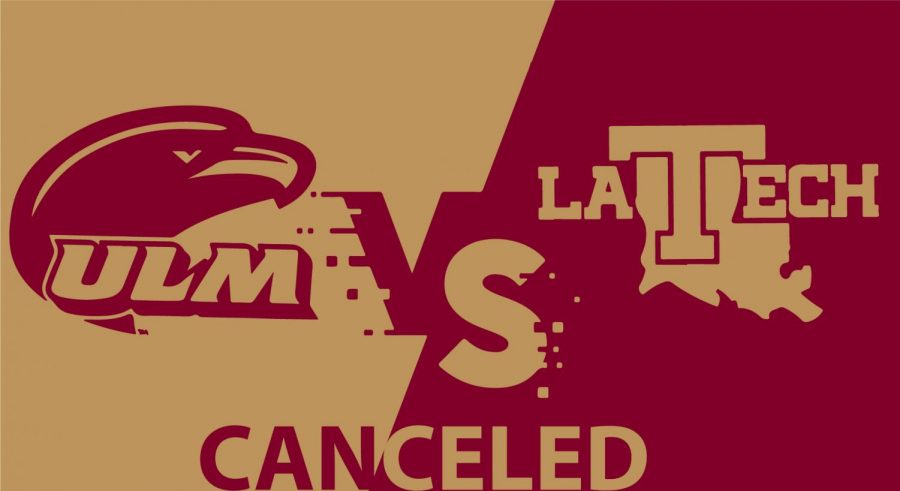 As the Thanksgiving holiday draws closer, many students and Warhawk fans were anticipating a renewed rivalry: ULM vs. Louisiana Tech. However, as COVID-19 cases rose to unprecedented numbers, especially between the two schools, the game was forced to be canceled.

While ULM has fallen to have the worst record in the country, the potential upset of an old rival would go down in Warhawk lore.

Currently, Tech has the all-time series lead with a record of 29-14, and Tech would love to pad their lead with the first matchup between the schools in 20 years.

Fans of both teams have expressed their dismay over the decision to cancel the game. Blaine Wilson, a freshman nursing major from ULM, said he has been waiting all season for this specific game, and to have it taken away was saddening.

“It’s disappointing,” Wilson said. “This has been the one game I have been looking forward to ever since the schedule was released.”

On the rival side, Emily Roberson, a freshman biology major from LA Tech, had been anticipating the game since quarantine. She said she even planned a trip to Shreveport with her friends for the occasion.

“This was the game that me and all my friends were looking forward to, especially with it being in Shreveport,” Roberson said. “I have a lot of friends at ULM and we’ve been talking about it all through quarantine.”

John Waskom, a LA Tech football player, said that to him and to his team, the ULM game felt like a special opportunity.

“Every game is important but this one has felt more personal than any other one,” Waskom said. “I hate to see it get taken off the schedule like this.”

The rivalry between the two teams located off I-20 dates back to 1953 when the Northeast Louisiana State Indians met against the LA Tech Bulldogs in Ruston. The two teams would meet every season until 1991. Then, they would meet again for a four-year streak until 2000 when the rivalry seemingly vanished.

While this was set to be the first game between these two programs in two decades, it was not the first attempt to renew an old rivalry.

In 2012, ULM pitched the idea to schedule a game between the two teams. However, LA Tech’s President, Les Guice, was opposed to the idea. Guice felt that the Warhawks were not up to par with a team that was becoming a “national brand.” At the time, Tech had won six straight bowl games, which is the fourth longest winning streak in NCAA football.

ULM on the other hand, has not made a bowl appearance in this time span.

Students and players are not the only people to be disappointed by the cancellation. ULM’s administration is saddened by the failed attempt to revive the iconic rivalry as well.