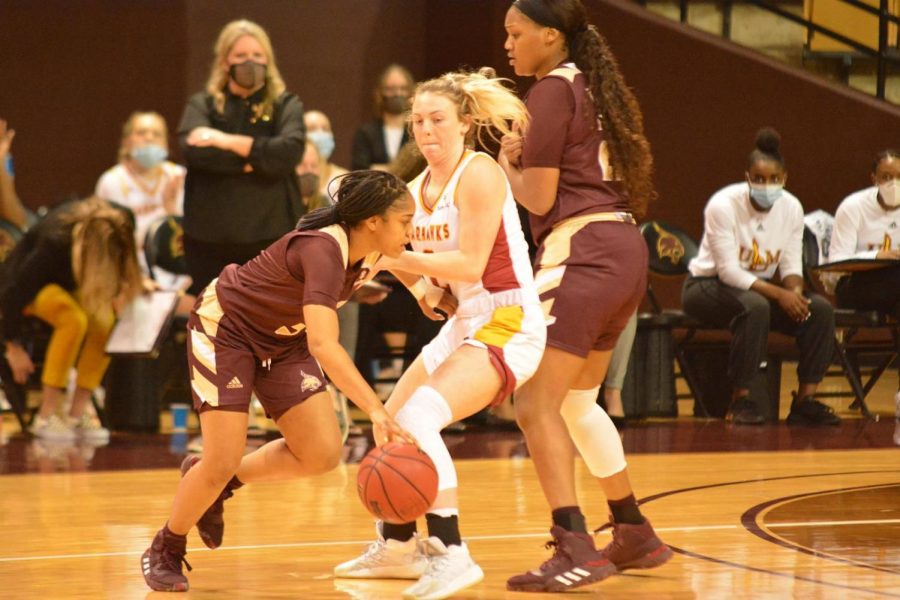 ULM women’s basketball had their losing streak extended to eight after dropping both games in their meeting with Texas State.  Ultimately, it was turnovers that sealed the Warhawks’ fate, allowing the Bobcats to get two wins on their home court.

The Bobcats put out the visiting Warhawks with dominant runs in the third quarter. They were able to create ten-plus point runs in both games that effectively put the game away.

ULM head coach Donald Williams said after the first meeting that “The end of the third quarter was a dagger.” The Bobcats were able to keep their turnovers low and made rebounding a team objective.

The Warhawks failed to box out on both ends of the court, allowing their opponent to get 48 rebounds in game one, 24 of which were offensive rebounds.

ULM had a cold night shooting, going a measly 2-12 from deep while Texas State’s shooters were white hot from beyond the arc and finished 9-15.

Williams would get his team zoned in on fixing areas that resulted in the 74-52 blowout in game one. While still losing 64-50, Williams felt he saw improvement in his team. The Warhawks won the battle on the boards by 7 and had a more accurate night in total shooting.

Part of the recovery was due to getting players returning from injury involved in the team again. Sophomore guard Gara Beth Self saw limited action after a knee injury a week ago against Arkansas State.

Once again, the Warhawks had a major deficit in the turnover differential, and the 14 extra turnovers allowed the Bobcats to take the second game of the series. The Warhawks also had key players get into foul trouble. Senior forward Kierra Crockett and center Diamond Brooks had four fouls in game one, Brooks repeated this in game two while Crockett fouled out.

Kierra Brimzy showed once again that she is the focal point of the ULM offense, leading in scoring in both nights with 16 and 24 respectively. Crockett had 13 points in game one with 8 boards. The Warhawks did not have any other players score double-digit points in either game, where the Bobcats had five instances of double-digit scoring.

One thing that has been brought to light from this series is the need for a reliable secondary scorer. Most teams they have played this season have at least two consistent scorers. They have players who can rebound effectively like Brooks and Crockett who compliment a solid scorer such as Brimzy. Crockett could fill this role perfectly, and with her rebounding performances, she would be a double-double threat nightly.

ULM’s next opponent, University of Arkansas-Little Rock has also had a less-than-stellar season. The Warhawks have to act soon if they want to save this season and end this losing streak.