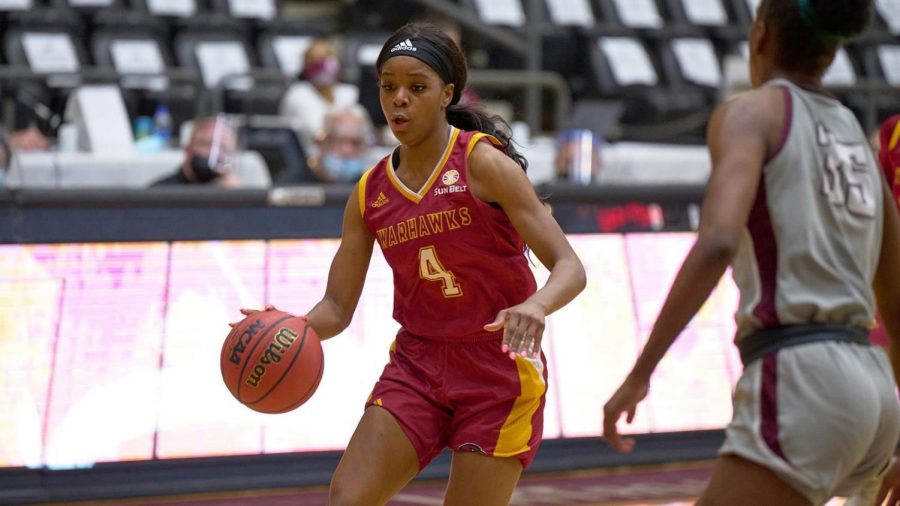 The Warhawks were blown out in their two-game series against the Little Rock Trojans. This is largely in part due to the injuries sustained by the team. With injuries piling up among key players, the Warhawks can only hope to heal up before their series against UT-Arlington next weekend in Monroe.

“Just about everybody is battling some sort of injury at this point.” Coach Williams Brooks said after game one.

The Trojans took advantage of this early in this game, holding a 46-19 lead at halftime. Senior forward Whitney Goins earned praise from her coach for playing well despite injury. Goins was the team’s leading scorer both nights, including a season-high 17 in game two.

The Trojans owe much of their success to their stellar shooting in game one. The team shot 10-17 for three en route to a 71-36 victory. The Warhawks made adjustments between games and limited the Trojans to 3-8 shooting from the arc and lost a tighter game 67-42.

The Warhawks found themselves in numerous scoring droughts while the Trojans went on double-digit runs. Little Rock closed out the first half of game one with a 17-0 run.

The Trojans had incredible performances all around. Krystan Vornes had double-digit rebounds both nights in addition to leading her team in scoring with 23 points on Saturday. Mayra Caicedo dished out 17 assists. Ky’lie Scott scored 23 on 6-10 3-point shooting. Meanwhile, ULM’s Goins would be the only player to score double digits in either of the two matchups.

Little Rock rises above .500 to 8-6 while Monroe falls to 2-12 and is still in search of their first win within the Sun Belt and their first victory since Dec. 12.