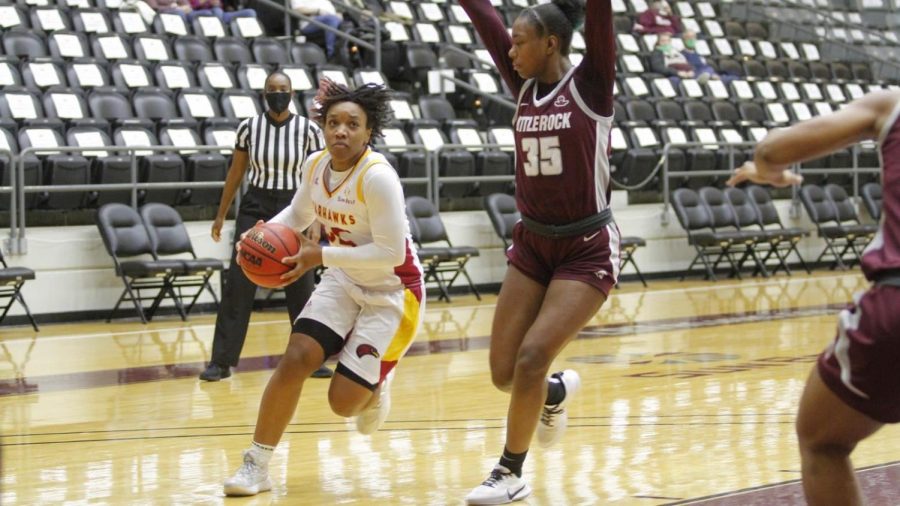 Women’s basketball had their best game in conference play against the University of Texas-Arlington Friday night. Unfortunately, they were met by a Mavericks team who was one step ahead and they dropped both games in the series.

The first game of the series was competitive and the Warhawks were not put away until the fourth quarter. Coach Brooks Williams said after the game that “Our mistakes have to be minimal against a team of their caliber and we made a few too many tonight.”

With ULM committing 23 turnovers compared the Mavericks with only seven, this game could have gone much differently than the 60-72 loss experienced by the Warhawks.

The Warhawks should look back to this game for positives as they have a daunting five games over the course of the next ten games, with the next two coming against the University of Louisiana-Lafayette.

As usual, junior guard Kierra Brimzly led her team in scoring with 22 this game along with six rebounds, but her mistakes set the Warhawks back as she compiled nine turnovers. Brimzly and senior guard Whitney Goins nailed six three-pointers in this game, and the team total 53% three-point shooting is the best in conference play.

The brief break from their usual scoring woes would only last one night, as the team would drop their second game 64-39. Sophomore guard Linda van Schaik was the only Warhawk to hit double-digit points. She came off the bench and led the team in minutes played at 31, points scored with 15, and was second in rebounding with seven. Late in the game she drained a trio of three-point shots. Senior forward Kierra Crockett finished second in scoring with seven and had a team high 10 rebounds.