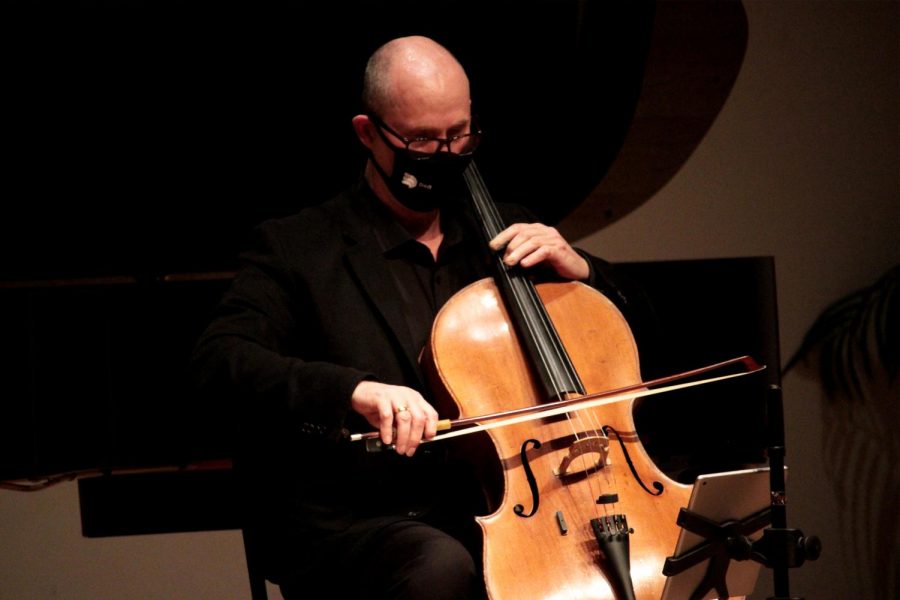 Notes bowed on the strings of a cello can accentuate somber tragedies yet boost whimsical fairy tales. And that is exactly what Christopher Adkins did Feb. 9 as he performed a concert with pianist Richard Seiler at Emy-Lou Biedenharn Recital Hall.

Students could attend live with reduced capacity or watch as it was livestreamed on Zoom. The cellist played selections from Johann Sebastian Bach, Tchaikovsky, Maurice Ravel, Antonín Dvořák and more. As a farewell and playful nod, he even played a rendition of the Disney jingle you hear during the logo.

“My favorite composer is Handel,” Parker said. “But I love Bach’s ‘Cello Suite No. 1 in G Minor, Prelude.’”

Ever since the pandemic began last March, people have picked up new hobbies and skills. Freshman elementary education major Sarah Grubbs started practicing cello a year before the pandemic, continuing to harness her skills today.

“It has always been my favorite instrument,” Grubbs said. “The reason why I wanted to play was because the cello has always had such a beautiful, deep sound to me.”

Grubbs said the instrument was easy to start practicing on. One of her favorite songs to play is “My Two Friends” by Ludwig van Beethoven.

Adkins grew up in a large musical family of six siblings who formed Adkins String Ensemble. He serves as principal cellist of Dallas Symphony Orchestra. He holds this position in Connecticut’s New Haven Symphony, Milwaukee Symphony and assistant principal cellist with Denver Symphony.

What’s the story behind the cello, anyway? Its full name in Italian is “violoncello,” a less common name nowadays. According to a research paper by Vincent Liu, the cello was first created in 16th century Italy by Andrea Amati. Only six of his original cellos are said to exist. His designs on these instruments detailed references to French King Charles IV, crowns and figures symbolizing piety and justice.

Cellos have seen many transformations over the centuries, from their wooden varnishes, materials and number of strings. The bow, or the stick, used to be made from Pernambuco wood, tortoise shells and ivory. Cellos by 17th century creators like Antonio Stradivari and Giovanni Rogeri are worth millions today.