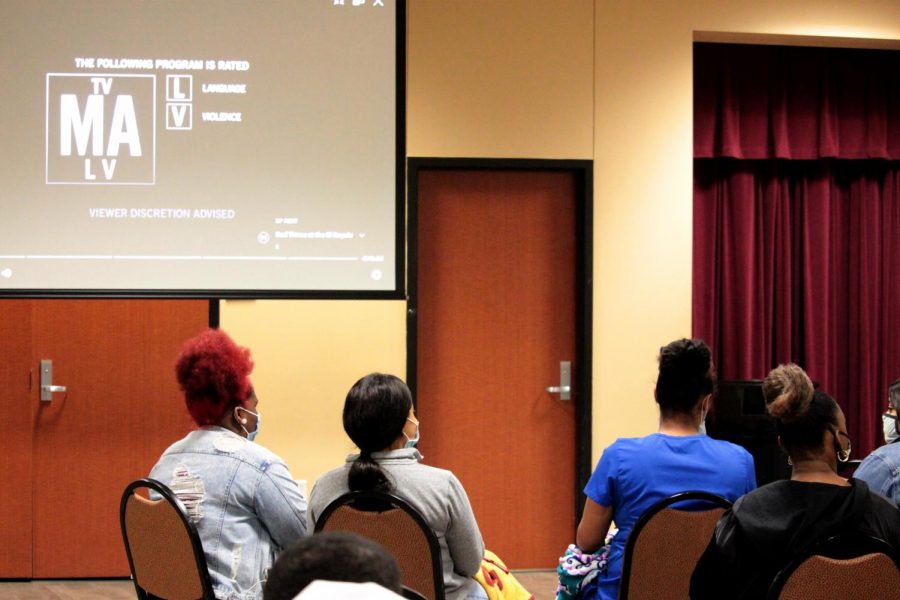 Meilan Whitaker sat in rapt attention with her eyes glued to the screen in front of her as she watched the movie shown on Thursday evening to honor Black History Month.

Movie night was hosted by CAB, the NAACP and the NPHC and they played “The Hate U Give,” a movie about police brutality and systemic racism.

Along with an excellent choice of film, snacks like candy, chips, drinks and popcorn were provided. Students seemed to have a good time as most of the audience stayed until the end of the movie.

“I went to movie night to show support to NAACP and the NPHC but I enjoyed the movie,” said Whitaker, a pre-nursing  student. “I think it properly showed how people are faced with racial dilemmas every day and it truly felt empowering to me.”

Ty’leshia Brown, junior CAB and NAACP member, said the organizations decided to choose “The Hate U Give” because it’s Black History Month, and it was a good movie to show students the importance of Black lives.

“It breaks down how police brutality affects people in our community which relates to the Black Lives Matter marches we had last year,” Brown said.

Brown also said that she is hoping to be able to host more movie nights showcasing Black empowerment in the future.

This movie was shown to wrap up Black History Month and to teach students about the struggles of being Black.

The movie also showed how Black people feel trying to be something they are not.

It gave the main character, Starr, a choice to be herself and speak out about the systemic racism members of her community face daily.

Kiauna Rollins, an NAACP member, said she believes the movie was played to exhibit the harsh reality of what it means to live in two different worlds as a Black person.

“Going to a predominantly white institution both in college and high school, I can sometimes relate,” Rollins said. “When people live with different perspectives and privileges, they don’t quite understand the hardships of your community or your life.”

Rollins said that it was a hard decision trying to find the right movie to play so that no one became offended or felt uneasy.

Movies such as “Miles Morales” and “Moonlight” were recommended but unfortunately did not make the cut. This was probably a good decision since “The Hate U Give” resonated with the students so well.

“We, as the Black community, have fought these hardships throughout history for so long, but ‘The Hate U Give’ is a modern example of finding your voice in the middle of it all,” Rollins said.