Jaguars jolt past ULM in round one 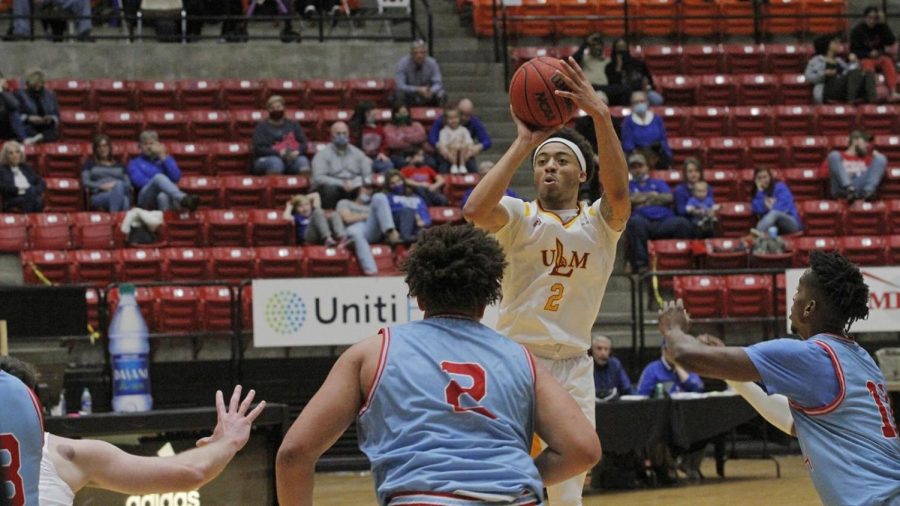 The men’s basketball season was brought to an end in the first round of the Sun Belt Tournament by the University of South Alabama. The Jaguars took down the Warhawks 80-72.

A trio of juniors helped ULM keep pace with the Jaguars. Forward Russell Harrison finished with 13 points and 13 rebounds, second in each category for the Warhawks. Guard Elijah Gonzales led with 14 points and three steals. Forward Marco Morency led the team with 14 rebounds. He was one point shy of a double-double.

This back-and-forth matchup saw 14 lead changes and 11 ties. ULM had their largest lead halfway through the second half 65-57. USA’s Michael Flowers went on a scoring streak at this point, finishing the game with 34 points.

Senior center Chris Efretuei saw limited play in his final colligate game. Freshman forward Thomas Howell was the primary big for the game. In addition to Efretuei, this was also the final game for guards Erie Olonade and Josh Nicholas.

ULM had a strong game rebounding. Of their 41 total rebounds, 17 were offensive. The team was able to convert these into 11 second chance points. The defense was able to hold USA to just five offensive boards.

ULM finished the season with a record of 7-19 and a conference record of 5-13. USA advances to the second round of the Sun Belt Conference Championship to take on the University of Louisiana-Lafayette Ragin’ Cajuns. The Cajuns would emerge victorious against the Jaguars.