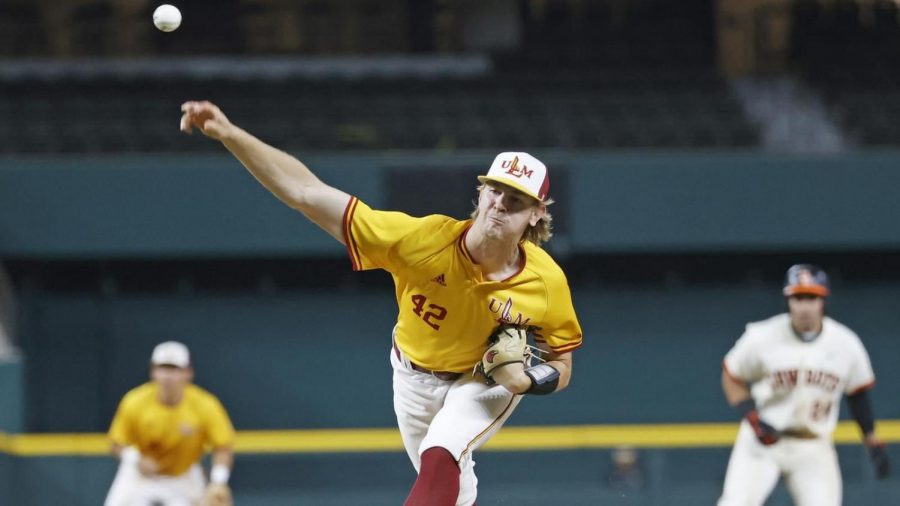 The ULM baseball team was faced with another top-25 challenge Tuesday night. This time, they matched up against the Cowboys of Oklahoma State.

The Warhawks were going into the game with momentum, as they upset #4 Ole Miss on Sunday, and were looking for their second straight win versus a ranked opponent.

The Warhawks were able to gain experience on a professional field, as the game was played on Globe Life Field in Arlington, Texas, home of the MLB’s Texas Rangers.

“That mound, the ballpark, everything gets you up for a big game,” said starting pitcher Nicholas Judice.

The Warhawks got off to an early lead in the first inning. Andrew Beasley scored off a wild pitch to first base from Eric Walker after a sacrifice bunt from Travis Washburn. With the bases loaded and one out, Trace Henry hit a sacrifice fly to right field, allowing Washburn to score. Micheal Cervantes hit a two-run double, and the Warhawks were able to score four runs in the first.

The Cowboys responded in the bottom of the second, with a sacrifice fly hit by Jaxson Cruil scoring a run.

In the third inning the Warhawks would fire back with three runs. The runs would come on RBI doubles hit by Danny DeSimone, Henry and Logan Wurm. The score after the third was 7-1.

With the score at 8-2 going into the top of the seventh, the Warhawks would put the game away with five runs. The first run came on an RBI single hit by Ryan Humeniuk. DeSimone and Wurm would each hit  two-run homers to right field, and would make the game 13-2 at the end of the seventh.

Despite four runs scored by Oklahoma State, the Warhawks would hang on and win the game with a 13-6 blowout.

Judice earned his first win of the season, as he allowed one hit, no runs and recorded seven strikeouts with five innings played.

The Warhawks improve to 7-6 on the season, carrying momentum going into Sun Belt play.