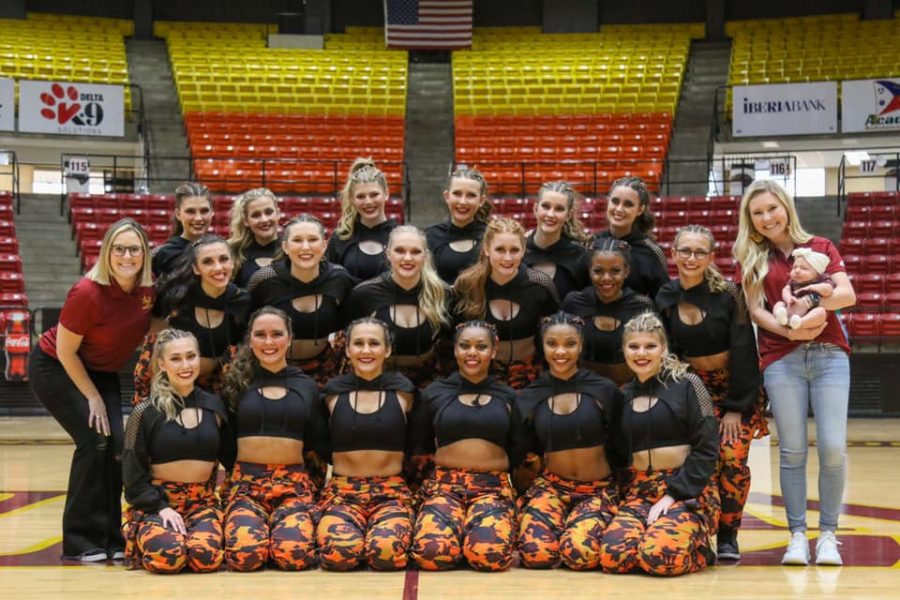 Three months—of practice, of stamina training, of early morning workouts, of multiple injuries. And it all comes down to a two minute performance.

The ULM Hawkline team learned a dance routine at the beginning of the spring semester and they’ve been perfecting it ever since.

It all paid off this last weekend when they won their third consecutive national championship title at the American Dance/Drill Team Nationals.

The team traveled to Dallas, Texas and competed against some of the best teams in the country, including Texas Christian University and Texas A&M.

And out of everyone, they were the only hip-hop team. According to the Hawkline head coach Sonni Bennett, winning first place with a hip-hop routine when everyone else is competing in jazz is a hard thing to do.

“They gave it 110% every single time,” Bennett said. “I truly believe this team is the definition of a champion.”

Daija Essien, a third year member, has been on the team for the past three wins. But that didn’t make this one any less special. In fact, she cried when they announced ULM as the winner.

“I’m more than thrilled to be a part of this team,” Essien said. “I wouldn’t regret any of the obstacles that came my way on the road to success.”

In the week leading up to the competition, the team practiced almost every day. They performed their routine at Northwood High School and Fant-Ewing Coliseum.

Second year member Valerie Paige said all their hard work over the past few years has been worth it. They got to walk in and out of the competition with everyone knowing who they are, all because of the tireless effort they put in to be great.

Kaylee Nolan, a first year member, said all those months of practice made their win feel even better.

“Winning tonight made everything worth it,” Nolan said. “It felt good to know that all of our hard work had paid off.”

Bennett said this team is positive, hard working and motivated. She, like Essein, was also in tears when she found out they won.

“This year’s team is truly like no team I’ve ever had,” Bennett said. “They’re resilient, but most importantly they are truly a family.”