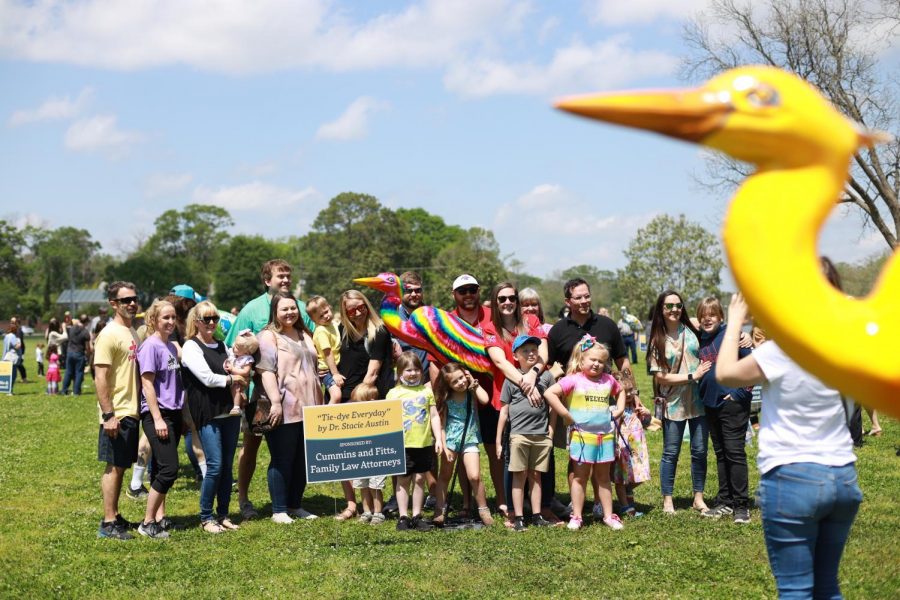 After putting about five hundred hours of work into designing his heron statue, Mario Mata stood beside his completed heron, which he named “La Garza,” at Herons on the Bayou.

Herons on the Bayou was the unveiling of 36 painted and decorated heron statues last Saturday.

Mata decided to use this opportunity to express his cultural background through his artwork.

“I wanted to raise a question,” Mata said. “I wanted to design a piece of art that people can see it and see where it comes from.”

The heron project began in fall 2019 when Brooke Foy, an art professor, led the making of 51 herons to be placed on campus and around Monroe and West Monroe.

“ULM has been amazing to work with, which is why we wanted to bring the reveal event to campus,” Foy said. “Bayou Park is such a beautiful place to showcase all of the work our artists and sponsors have done.”

Darla McKee, a parent of a student, attended with her son.

“My favorite artwork was the ‘La Garza’ because it is so detailed has all these beautiful unique beads,” McKee said. “And the artist said that it took him 400 to 500 hours of work to complete.”

“We love the arts and wanted to help,” Stevens said. “Every year, we donate something to the arts and the Monroe/West Monroe community.”

When Buffington was about four, Neville High School still had a real tiger named Shasta as their mascot. She channeled her memory of Shanta into her design.

“Neville High school is a school of lots of traditions,” Stevens said. “To our school, Shasta represents pride, traditions, legendary people that have attended the school and also the strength of our school both in academics and athletics.”

Some of the herons from Saturday were auctioned off and the proceeds will be donated to Grace Place Ministries and the Northeast Louisiana Delta African American Heritage Museum.