Over $400 donated to nonprofit for survivors 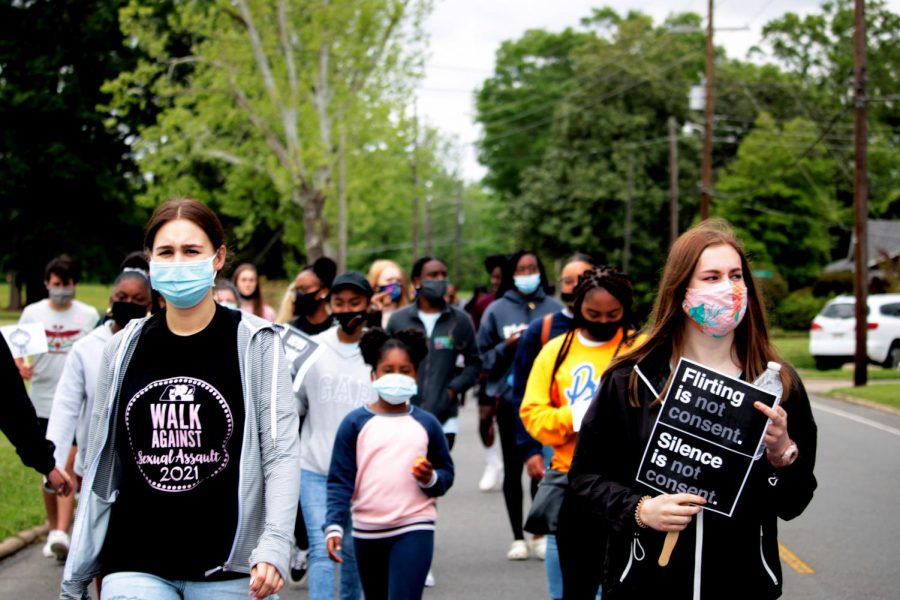 For Trinity Williams, the walk against sexual assault is more than just a walk to spread awareness. It’s an opportunity to share her story and support other survivors.

“It helps to know that there are people that believe you and care for you and support you,” Williams said.

ULM’s Ambitious Women Society wanted to do something to help women like Williams that are survivors of sexual assault. So they partnered with a Monroe nonprofit, The Wellspring, and other RSOs to start the first annual Walk Against Sexual Assault.

The walk was started to bring attention to Sexual Assault Awareness Month, which is an annual campaign to raise public awareness and prevent sexual assault.

Chiemeka Onyemechara, founder and president of AWS, said she felt it was important to shine light on a problem that many women have faced but do not feel comfortable talking about.

The walk started with a sexual assault Q&A with the Ouachita Police Department and ended with a walk around Forsythe Park and a speech by The Wellspring.

Melanie Clark, The Wellspring’s sexual assault program coordinator and therapist, spoke about how both their organization and friends of a sexual assault survivor can help survivors.

According to Clark, the best thing to do for survivors is to just listen to them.

“The biggest thing [survivors] need is for someone to believe what they are saying, and say I am here for you,” Clark said.

For survivors like Williams, this struck home. She was sexually assaulted at the age of six and said she just wanted someone to care.

Clark explained that someone can be sexually assaulted regardless of their age, sexuality, race or gender. Therefore, supporting all sexual assault survivors is extremely important.

Carly Herrera, LAMBDA society’s president, said they decided to join in on the event because they wanted to advocate for LGBTQ sexual assault survivors, which are typically overlooked.

Herrera said the LGBTQ community suffers quietly through sexual assault because of “shame based around not being out and a lack of discussion about LGBTQ sexual assault.”

The Wellspring invites survivors of sexual assault to feel comfortable contacting them regardless of gender, sexuality or race.

Over $400 was donated to The Wellspring through the walk. This money will allow them to continue to help survivors no matter who they are or what their story is.

The Wellspring strives to help as many people as possible, so this donation will help them out tremendously.