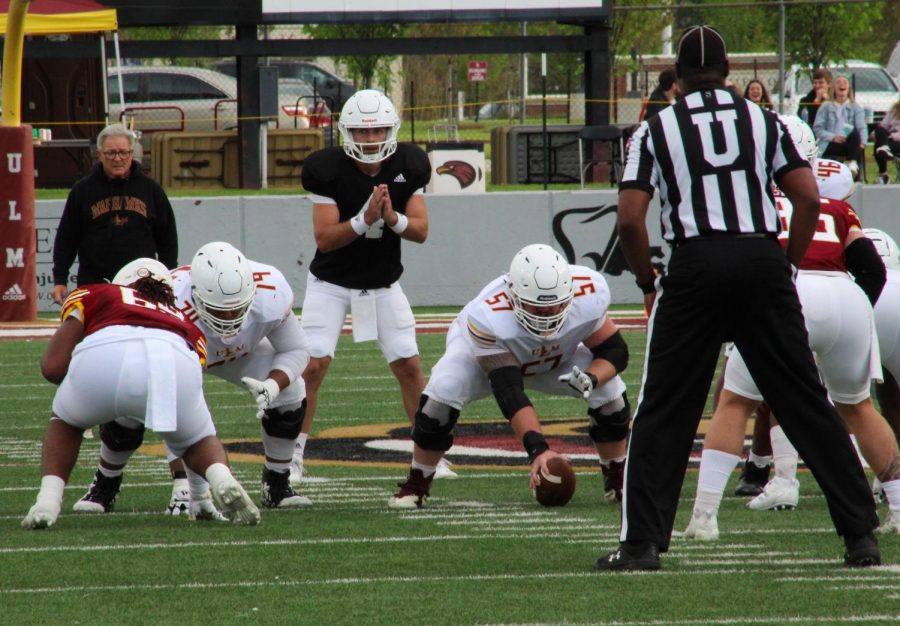 Spring is the season of new life. For many, it is a breath of fresh air. For ULM football, it is an opportunity to change the trajectory of the program after a nation-worst 0-10 season.

The Terry Bowden era at ULM began with an inter-team scrimmage pitting offense against defense. After 16 drives, Team White stood tall with a 51-48 win.

Scoring was based off of impact plays on both sides of the ball. Team Maroon was coached by DC Zac Alley, who joined ULM after serving as Boise State’s linebackers coach. Team White was led by OC Rich Rodriguez, the former head coach of Michigan and Arizona.

The Warhawks will go into the 2021 season facing an immediate challenge versus Kentucky from the SEC, and will also play in-state powerhouse LSU. They will also open at home against coach Deion Sanders’ Jackson State.

With the upgraded roster and monumental coaching hires, the Warhawks will look to rise from the ashes of last season.

“To upgrade our team, we have got to create competition,” said coach Bowden.

One competition that many have eyes on is the starting quarterback battle, which features quarterbacks Colby Suits, Jeremy Hunt and Rhett Rodriguez, who is a transfer from the University of Arizona and the son of coach Rodriguez.

“At first they were on us, it was something we weren’t used to,” said wide receiver Johnathan Hodoh, who is a six-year senior going through his third coaching staff change.

The spring game occurred after weeks of grueling practice to fit the new schemes.

As the weeks went on, the players adapted to the new system, one where they hope to thrive.

“Everyone is stepping up,” said defensive back Traveion Webster. “Veterans are stepping up, and even the young guys are doing their part.”

Suits lead the team in passing yards. He completed 9 for 14 for 138 yards passing, no touchdowns and one interception.

Rodriguez went 6 for 13 with 80 yards passing, three TDs and one interception.

Hunt went 5-10, throwing for 40 yards and one TD with no interceptions.

The leading rusher for the Warhawks was Isaiah Phillips, who rushed for 60 yards on 10 attempts, and scored two rushing TDs, including one from 16 yards out.

Leading the team in receiving was Dariyan Wiley, who had three receptions for 65 yards, and two TDs.