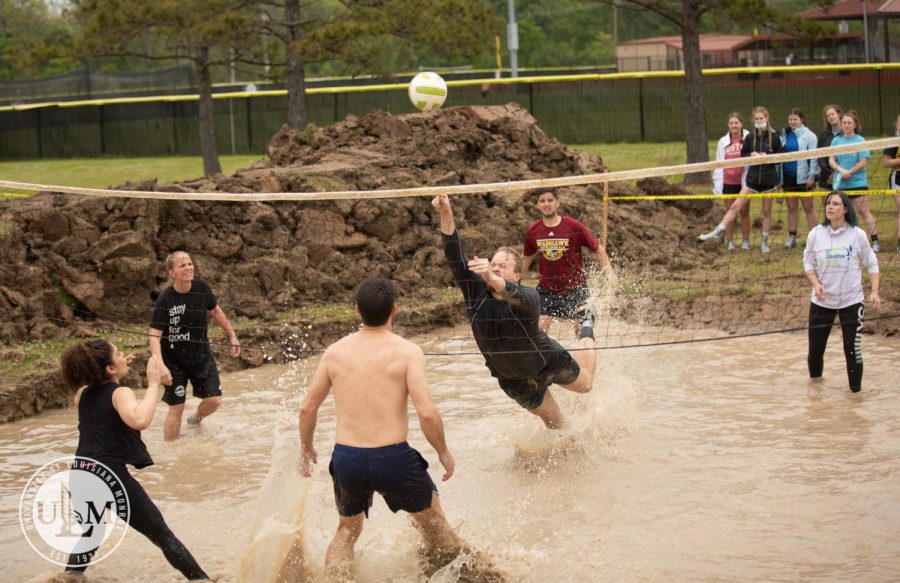 As Grace Ebang walked toward University Park to watch Oozeball, a longtime ULM tradition, she was surprised to see so many people at the event.

Ebang, a P1 pharmacy major, attended Oozeball with some friends. Ebang transferred to ULM in 2019, but because of COVID-19, she attended her first Oozeball tournament this year. She was not disappointed.

“I had about three friends that competed in the tournament. I saw it as an opportunity to support my friends while also watching other teams compete,” Ebang said.

Students got really muddy and sweaty on Friday for the annual Oozeball competition, hosted by 31 Ambassadors and the Alumni Association.

Embracing the messiness of the mud, many Warhawks and members of the Monroe community showed up in good spirits and cheered for their favorite teams.

With a gloomy sky and a few raindrops here and there, the audience came prepared for unpredictable weather. The venue was filled with a lot of raincoat clad people and others with umbrellas.

The competitors brought their best efforts and left it all in the playing pits.

Chris Williams, Greek Life coordinator, hosted this year’s event for the first time. He was prepared to deliver an Oozeball tournament worth getting muddy for.

“Just like anything that I host, I will keep it fun and entertaining,” Williams said. “This weather is not going to stop anything–especially not for the participants. This is Oozeball, a little more water won’t hurt.”

Antasia Rhodes, senior kinesiology major, said the event was right up her alley.

“I love attending sporting events,” Rhodes said. “Especially ones like this where you can witness friendly competition and competition that involves mud.”

The Radio People provided sweet tunes for the spectators to groove to. They parked their mobile trailer, which looked like a jukebox, near University Park and pumped music from their trailer.

The music kept the competitors bringing their A-game throughout the tournament.

“Even though I do not think I will be competing next year,” Ebang said. “I will attend the event again and support my friends and other students that decide to compete.”

The hosts also kept the participants nourished with  pizza, soda and water.

At the beginning of the event, Williams said, “Rain or shine, the fun must go on.”

The fun did go on. All competitors left coated in mud from head to toe. The crowd were not left out, as they made new friends, memories and walked away with a lot of laughter.