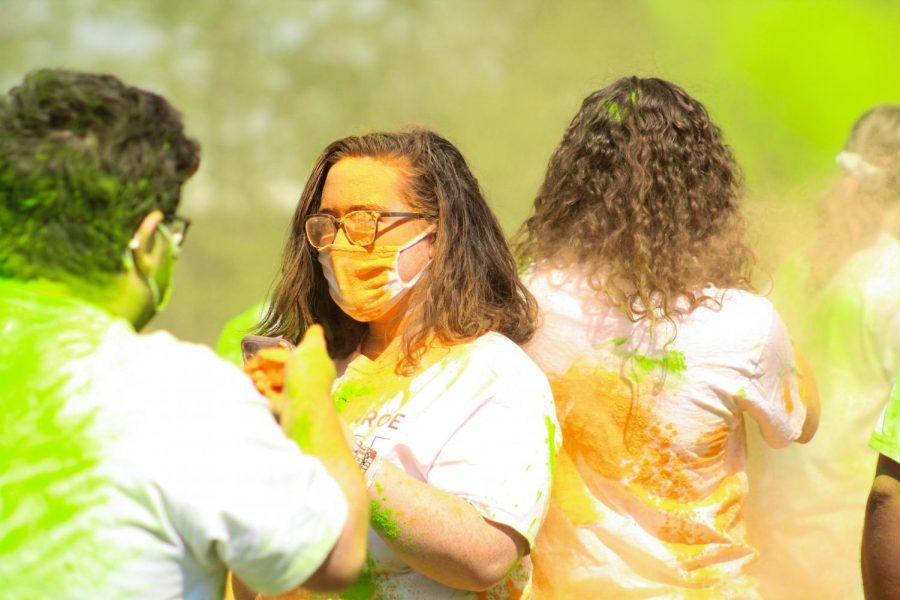 Two teams full of energy and excitement dipped their cups into the bucket of their designated color. After Warhawks had loaded their cups, they proceeded to slaughter their opponents in a battle of powdered colors.

Spring Fever plans for Tuesday afternoon started with North Monroe College handing out free white t-shirts and masks.  The day ended around 4 p.m. with everyone at Bayou Park, along with the grasses, covered in a whirlwind of orange and green.

Reagan Driskoll, freshman pre-nursing major, said the most memorable part of the event was “everyone coming together and just throwing color at each other.”

Driskoll said the color war was fun, and she would attend again.

North Monroe College, a church ministry for college students, hosted the Color War with Campus Activities Board. North Monroe College partnered with CAB in previous events, such as the Freshman Color War, that occurred in the fall semester during Welcome Week.

Abbigail Spikes, sophomore communication major and CAB member, said that CAB is open to planning more events with North Monroe. These kinds of events serve as an opportunity for diverse groups of students to get together.

“I thought it was pretty awesome,” Spikes said. “A lot of people got to meet new people and throwing colors at each other was a cool icebreaker.”

As the vicious battle of colors raged, the ferocious green team reigned victoriously.

The orange team hung their heads low as they walked away defeated.

Although the Color War sounds like an event where people may feel divided, it was used to unite students.

Kendal Clayton, North Monroe’s college pastor, said they hosted this event for ULM students to come and get to know others while eating snacks or participating in the war.

“We do events like this on campus to meet new students, connect with them and hopefully let them know that they have a place to belong,” Clayton said.

While the Color War left the teams with the attitude of “May the best color win,” it led to new friendships and gave students a small relaxing break from the end of semester blues.