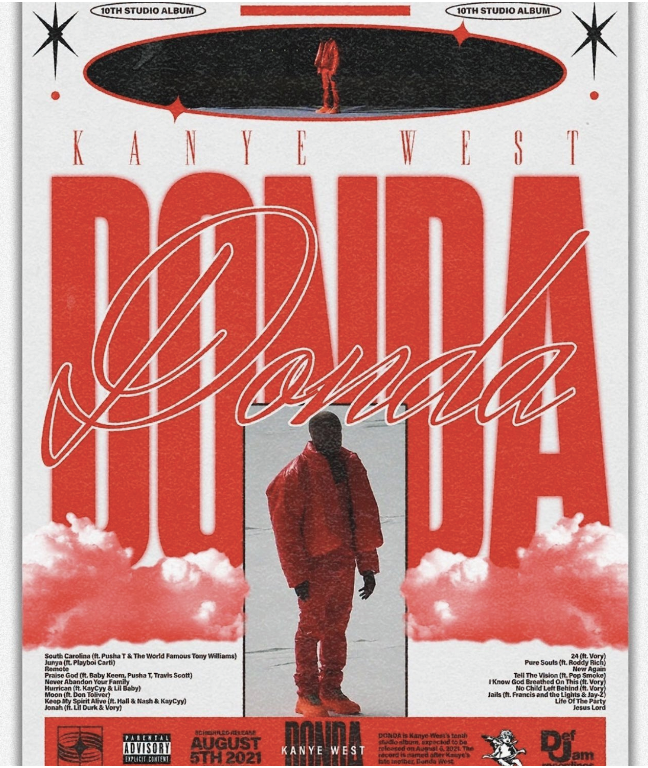 Kanye West has always reaped the fruits of his labor. His music has won countless awards.

His signature shoe line, Yeezy, is a status symbol. Any conversation about the best rap artists of the era is incomplete without mentioning West.

However, his life has been littered with tragedy and controversy. He has dealt with divorce, a failed presidential bid and the loss of his mother, Donda West, all while his claims about his mental health have been downplayed by the masses.

Some might wonder if an album is worth an extra year’s worth of setbacks, changes and additional production. In the case of Donda, the answer is a definitively, “Yes.”

In Donda, West honors his mother who died in 2007 while giving the world a front row seat to his continued journey to find peace from all that plagues him.

This album may not have the guaranteed chart toppers of his past albums but it continues a journey providing music for the soul.

Donda provides relatable accounts of struggles and recovery that are absent in a lot of modern rap.

The album shows the development of West when played from start to finish.

The fast life of a celebrity shows through on the earlier tracks.

As the issues pile up in the background, the struggles cumulate on “Jesus Lord.” This track has the heaviest material on the album. West brought on Jay Electronica who delivered the most impressive lyrical content of Donda.

The emphasis on praising God increases after this track. The four final tracks on the album are repeats of earlier tracks with different features.

Even with the heavy emphasis on the album’s topics, this album still has great music that stands well on its own. Both versions of “Jail” are uplifting and could help listeners out of their troubles.

“Hurricane” was blessed with its production and an angelic chorus by the Weeknd. West and Lil Baby come in with much of the lyrical content.

For those wanting a high-tempo track, “Off the Grid” will satisfy those fans. West brings on Playboi Carti over a drill beat for the album’s best chance for an arena jam.

Those who share any of the same pains of West now have the opportunity to connect with him. Donda, as an album, can be seen as a group therapy session with West and all the artists featured on it. Returning collaborations with artists like Playboi Carti and the Weeknd feel right at home.

Even the controversial inclusion of Dababy and Marilyn Manson on an alternate take of “Jail” fits in place.

Just like his previous release, Jesus is Lord, West’s Christian faith is front and center on every track.

West, along with his numerous featured artists, give glory to God for their success and overcoming adversity.

West kept his promise of writing non-explicit music as there is no explicit release for an album already requiring minimal censors.