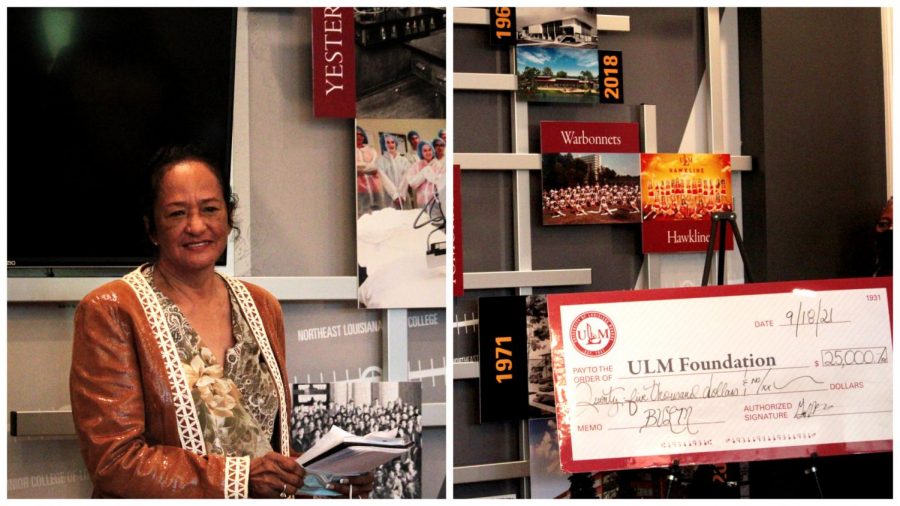 Diana John remembers her husband as a kind, gentle person who believed in humanity. Many others remember him the same way.

That’s why the BULM Club of the ULM Alumni Association decided to honor him by naming a scholarship after him—the Dr. Alex John, Jr. Endowed Scholarship.

BULM presented the scholarship check for $25,000 to the ULM Foundation last Saturday. The scholarship is for full time undergraduate students and special consideration will be given to marginalized or first-generation students.

Alex John was not only a graduate and a professor of ULM, but also the first Black man to hold an executive position at ULM.

He was also an advocate for Black students and encouraged them to persevere in their quest for a college education.

John received his bachelor’s and master’s degrees from McNeese State University. He then earned his Doctor of Education from ULM, which was then known as Northeast Louisiana University.

He became a psychology instructor at NLU in 1971 and later on became a tenured professor. In 1980 he became the dean of the Office of Public Relations before leaving the university in 1982.

BULM, which was formerly the Black NLU chapter of the Alumni Association, started the scholarship fund in 2012 with only $2,100.

Gerald McHenry, who became a member of BNLU several years ago and is now the president of BULM , championed the initiative and received support from fellow BULM members.

53 donors contributed to the fund over the years and by 2020 the scholarship exceeded the $25,000 endowment minimum.

McHenry said John was a supportive presence on campus who was dedicated to helping Black students succeed. While John was at the university there were not many faculty or administrators who were African American.

“He was that person you could go to for guidance,” McHenry said. “He would always have an open door and an open ear. He was like your stand-in dad. Dr. John changed the lives of many students by being always willing to help.”

One contributor to the scholarship, Rev. William Gipson who received his bachelor’s from NLU in 1979, referred to John as a “saint.”

“There are literally thousands of testimonies from the students he helped and advised,” Gipson said. “His influence will last for generations to come.”

Diana said her husband was a pianist and that taught him discipline and commitment, because playing the piano is all about discipline, detail and caring.

“He emulated that in his life,” Diana said.

She said this scholarship, along with the legacy of her husband, will encourage young people today to see that others came before them and helped change the future.

“He believed that if given an opportunity, each person could learn what they needed to learn, and succeed,” Diana said.