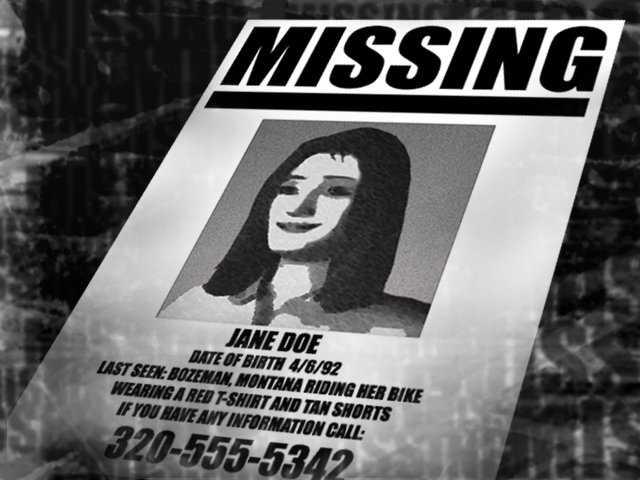 Graphic to be used for missing person stories.

Gabby Petito was reported missing on Sept. 11 after her fiancé, Brian Laundrie, returned home alone from a cross-country trip they went on together.

On Sept. 15, Laundrie was deemed a person of interest in Petito’s diappearance. He sought out legal counsel and refused to give any information to the authorities.

According to the New York Times, the FBI said they were searching for Petito in Grand Teton National Park and the Spread Creek dispersed camping area, which are both in Wyoming. On Sept. 19, Petito’s remains were found in a national forest in Wyoming.

Petito’s disappearance is known about globally. At the start of her case, many online shared their thoughts and prayers for her and her family.

The news of her disappearance was shared worldwide through social media. The case was thoroughly investigated and within eight days of Petito being reported missing she was found.

Although this is all good news, it leaves us with an important question: Why aren’t all missing person cases handled like this?

All missing person cases should be handled with the same effort, resources and outreach that this case had.

There was so much energy put into finding Petito that we rarely see with other cases.  This case proved just how much how the online community can affect a missing person case.

According to a report published by the Wyoming Missing and Murdered Indigenous People Task Force, this year, at least 710 Indigenous people—mostly girls—went missing in Wyoming from 2011 to 2020.

Many were in national parks just like Petito. These girls deserve the same time and effort that she received.

Petito’s case needed to be solved and I’m glad that her family now has some closure.  But the families of these missing Indigenous people deserve closure as well.

I know that people go missing and sometimes they just aren’t found.  I also know that the authorities don’t have the resources to search forever for missing people.

In a missing person case, there often comes a point where a different person goes missing and the focus shifts, leaving another missing person behind.

According to Statista, the reported number of missing person cases from the National Crime Information Center have been over 600,000 people each year from 1990 to 2019.

That is too many people.  If authorities found a way to effectively use social media in their efforts to find people, they would be more successful.

Missing persons would become more of a priority not only to the online community but also to officers put in charge of these cases.