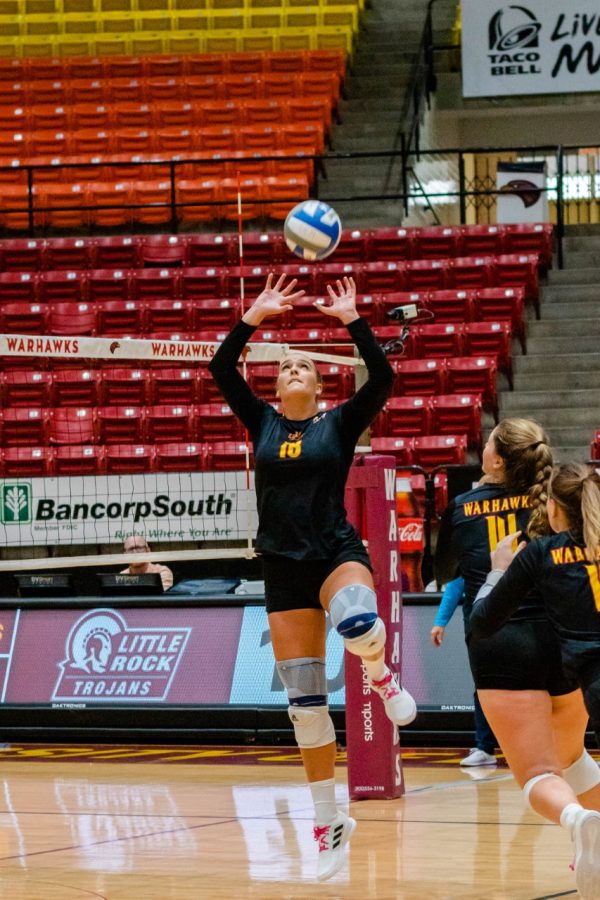 The Trojans came back to win set one 25-22 and dominated each remaining set with scores of 25-13 and 25-15. ULM was on the verge of taking the first set as they took a 20-17 lead, the largest lead of the night for the Warhawks. With several attack errors on ULM, the Trojans were able to capitalize with seven unanswered points to steal the first set.

“We played a new lineup out there tonight, and we’ve been practicing it all week,” Warhawks head coach Charlie Olson said. “But we had too many attack errors and that’s how Little Rock won the game.”

ULM committed 25 attack errors through three sets while the Trojans played a much cleaner game with just nine attack errors all game.

In the second set both teams were knotted up at 4-4 but the Trojans fled from the tie and outscored the Warhawks 21-9. Little Rock’s 12-point lead was the largest deficit of the night for the Warhawks.

The Trojans’ momentum continued to carry them into the third set to complete the sweep against the Warhawks. This was the first time this season the Warhawks were swept at home and the 12th time they’ve been swept by an opposing team.

Cali Assaley and Phoebe Stigen both led in kills for the Warhawks with eight kills each. Behind them was Avery Cole with six kills. Mariana Volponi e Giordan led in assists with nine. Kaitlin Davis and Avery Cole both finished with 14 digs.

ULM has a chance to get back in the winning column as they will be back in action at home on Tuesday as they battle their bitter rival, University of Louisiana at Lafayette, at Fant-Ewing Coliseum at 6 p.m.