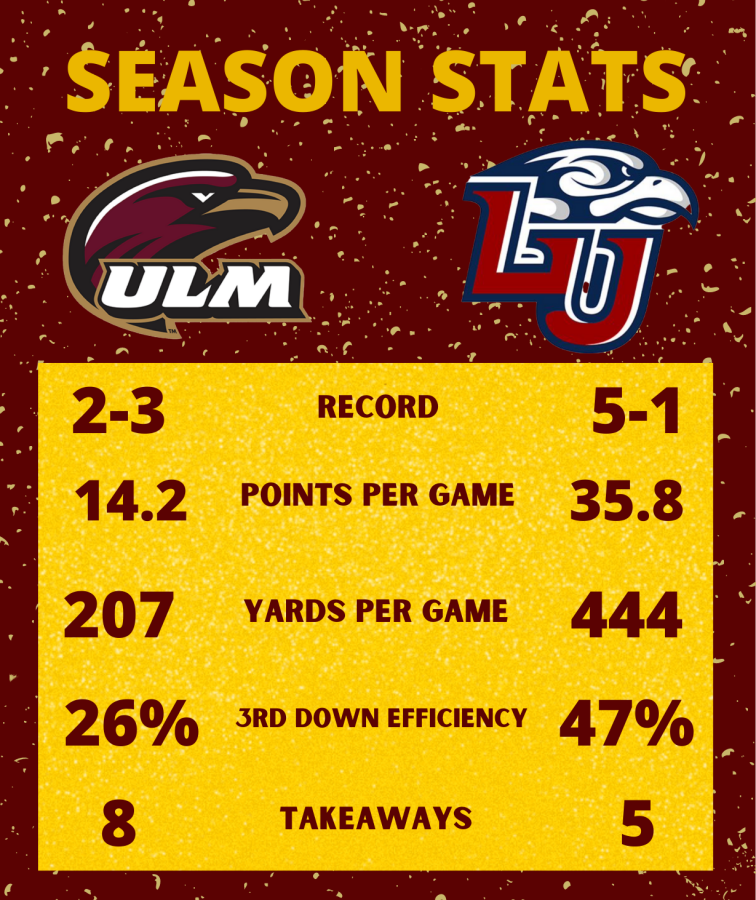 Warhawks football gets their chance at redemption Saturday when they host the Liberty Flames. ULM was stunned in its meeting with the Flames last season as the Warhawks were held under 200 yards of offense and converted only once on third down out of 16 attempts in their 40-7 loss.

Liberty enters Malone Stadium with a 5-1 record. The Flames have an average margin of victory of 25.8 points. Their only loss came to Syracuse 24-21 which was the only time they allowed a team to score 20 or more points this season.

Malik Willis leads the Flames at quarterback. The dual-threat QB is one of two players in the nation in the top 40 for both passing and rushing touchdowns. Willis also leads the nation in runs of 10 or more yards with 21—not just out of QBs, but at all positions.

ULM comes into the week at 2-3. After starting the season 2-1, ULM has lost their past two matchups to Sun Belt opponents. ULM is expected to enter the contest without junior QB Rhett Rodriguez who was hospitalized with a lung injury following their victory over Troy before being released two days later.

Freshman Chandler Rogers has filled in as the starting QB in ULM’s losses to #15 Coastal Carolina and Georgia State. Rogers has seen limited play time in all five of the Warhawks’ games this season. Rogers has completed 13-27 of  his passes for  157 yards passing and threw his first two touchdown passes of the season against Georgia State.

Rogers has been used primarily as a run-first quarterback with him executing numerous option plays and designed runs. Rogers is the second leading rusher for ULM with 171 yards on the ground. He sits behind running back Andrew Henry who has 203 yards rushing.

ULM’s offense has executed at its best when the defense forces turnovers or forces three-and-outs. Through their last two contests the Warhawks’ defense has allowed over 50 points per game.

Even if ULM defensive coordinator Zach Alley is able to refocus in his defensive unit, the offense has an uphill battle against one of the nation’s premier defenses. The Flames have recorded five or more sacks three times this season. Liberty’s defense is top-10 in FBS football in yards allowed and points allowed.

The Flames special teams have missed three of their five field goal attempts on the season with all  kicks coming from inside 50 yards. Meanwhile ULM kicker Calum Sutherland has made nine of 12 field goals on the season.