Warhawks cooked by Cajuns, shut out by Chanticleers 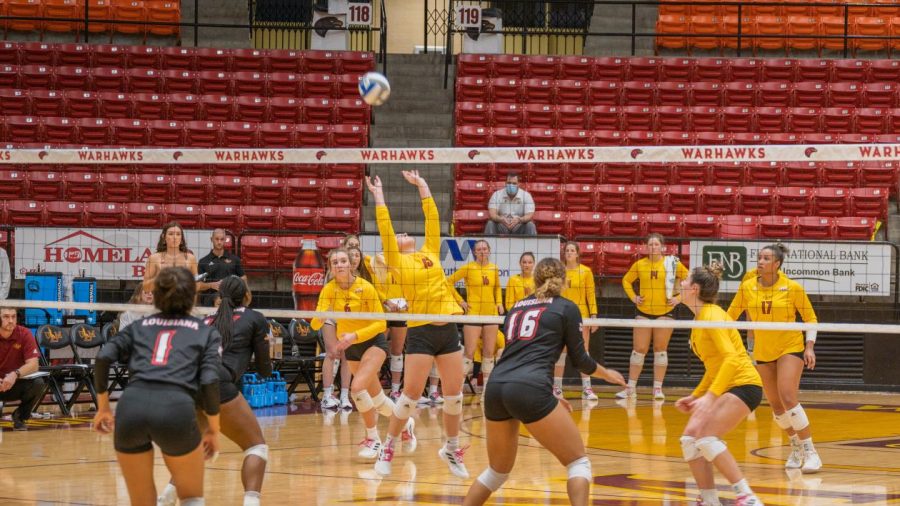 Warhawks volleyball met their toughest challenge of the year with a home matchup against their biggest rivals—the Ragin’ Cajuns—before traveling to South Carolina to face off with the Coastal Carolina Chanticleers.

Both the Cajuns and Chanticleers entered the contest as two of the best teams in the Sun Belt, and unfortunately for ULM the result was 3-0 losses for both matchups.

The pair off losses marks their seventh straight and their 18th loss of the season. The Cajuns improved to 11-4 with their win and stretched their win streak to five.

The Chanticleers’ win reenforced their first-place spot in the SBC with a perfect 7-0 record in conference play.

ULM has not defeated the Cajuns since 2014 and remains winless all-time against Coastal Carolina.

“We’re at the point where we have to do our best to stay healthy and avoid fatigue with us playing five matches in nine days,” ULM head coach Charlie Olson said.

“We had to shuffle some things around with our roster management and [the Cajuns] definitely exposed that,” Olson said.

Coastal Carolina remains a powerhouse in the SBC. They are undefeated against ULM all-time and have won 27-straight regular season games versus SBC opponents.

“We’re playing Coastal in a place that really only one of our players has been to before[…] it’s a very tough game against a very skilled opponent,” Olson said.

Cali Assaley was the only Warhawk to break double-digit kills in either match with 10 kills versus Coastal Carolina.

Phoebe Sigen and Avery Cole recorded eight against the Cajuns. Mariana Volponi e Giordan handed out 24 assists against the Chanticleers. Madeline Hogan led ULM in digs in both contests, recording 11 and 15 respectively.