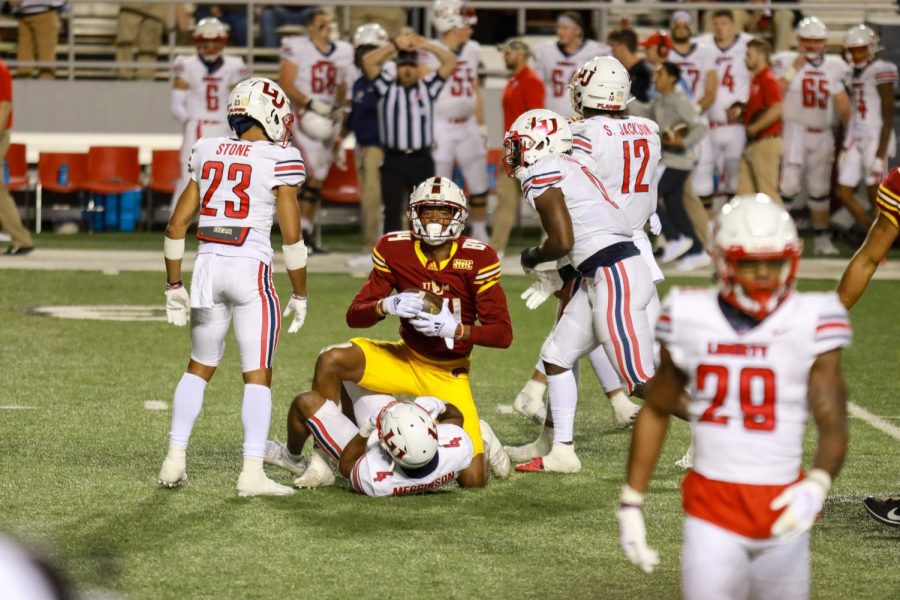 Don’t corner an underdog, because it just might bite back. Besides their home-opener against Jackson State, the Warhawks have been heavy underdogs in every contest this season.

ULM rose to the challenge and upset Troy, but struggled after losing quarterback Rhett Rodriguez with a lung injury. With Rodriguez still out of action and Chandler Rogers filling in at quarterback, ULM played up to a strongly favored Liberty Flames team and garnered their second upset win of the season with a 31-28 victory.

After a scoreless first half, ULM scored 28 unanswered points to open the second half. Entering the contest, Liberty’s defense was fifth in the nation with an average of only 6.2 points allowed.

“He was the main discussion,” Williams said. “We came into it knowing (his reputation), but we didn’t come scared.”

The dynamic abilities of quarterback Malik Willis helped pencil in the Flames as easy favorites going into the game. Willis has garnered the attention of many NFL scouts for next year’s draft class.

“I’ve never coached in a game that I’ve been that much of an underdog and won the game,” ULM head coach Terry Bowden said. Bowden’s team emerged victorious despite Liberty being favored by 32 points.

“It was a win with a lot of heroes for our football team,” Bowden said.

Tight end Zach Rasmussen was the first hero of the night. When Sutherland’s field goal was blocked Rasmussen chased down the Liberty returner and saved a touchdown by sending him out of bounds at the ULM 2-yard line. Then it became the ULM defensive unit’s turn to play hero.

Liberty’s explosive offense led by Willis had plenty of ways to punch in for a touchdown, but the Warhawks held up to the offensive barrage. Liberty made the call to go for fourth down for the second time in the game and break the 0-0 stalemate, but ULM’s defense held up and stopped the Flames.

Not all efforts from the Warhawks’ defense played out smoothly. A pressure from linebacker Zach Woodard forced Millis to throw into the Warhawk secondary and safety Tre Odom came down with ULM’s first interception of the night. Two plays into the following drive and Rogers was picked off to set up Liberty’s first touchdown of the night and take the lead 7-0. Millis ran in his first touchdown from three yards out, and with 16 seconds remaining in the first half he connected on a 9-yard touchdown pass to lead 14-0 at half.

Before Liberty tied the game at 28-28 with two second-half touchdowns, the second half revival for ULM was in full swing.

Rogers connected with running back Andrew Henry as he went untouched into the end zone to put ULM on the board for the first time.

Henry found the end zone again to cap off a 40-yard rush and put ULM up 21-14. Running back Abraham Alce also got on the board with a touchdown with a 1-yard run on the back of an interception returned to the 2-yard line by cornerback Josh Newton. Rogers connected with Rasmussen for a 12-yard touchdown.