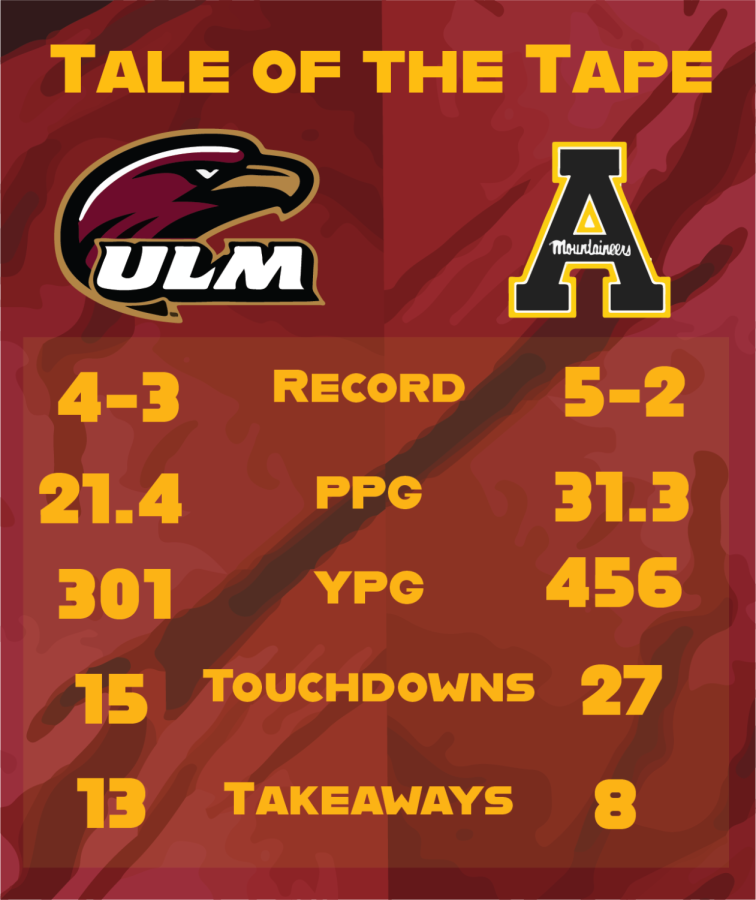 This Saturday, two football teams with major upset wins to their credit will clash in a Sun Belt showcase.

The Mountaineers sit atop the SBC East Division after their win over the Chanitleers.

Look at the betting odds for this matchup and see that the Mountaineers are penciled in as multi-score winners.

Look at the betting odds again and see that ULM should be 1-6 instead of 4-3.

App State has shown its ability to put away matches early. The Mountaineers won three games by two or more touchdowns.

The Warhawks have yet to win a matchup by 14 or more points.

Conversely to this, ULM has shown that if it’s in contention late in the game, then the Warhawks can claim victory.

No doubt that a successful ULM is a 60-minute football team.

The Mountaineer faithful will make this contest difficult for ULM. In their win over Coastal Carolina, 31,000 fans piled into a 30,000-seat stadium.

Boone, North Carolina has consistently been one of the toughest places to play in the Sun Belt. The warm-weather Warhawks will likely play in sub 50 degree weather this Saturday.

A win against App State would put ULM in talks for a conference championship and one win away from bowl eligibility.

Stopping the run is crucial for ULM. App State has two dominant running backs. Nate Noel is second in the conference with 635 yards rushing. Camerun Peoples is first with 10 touchdowns.

Still, much of App State’s success rides quarterback Chase Brice who leads the SBC with 262 yards passing per game.

The Mountaineers also have two of the top five receivers in yards per game in the SBC.

App State has a solid defensive unit. DiMarco Jackson is second in the conference with four sacks on the season.

App State has the challenge of preparing against a team that keeps breaking their glass ceiling.

ULM set season-highs across the board in their victory over South Alabama last Saturday.

ULM’s Chandler Rogers has developed from a shaky game manager to a potentially electric dual-threat quarterback. He became the first Warhawks quarterback since Caleb Evans to throw for four touchdowns in a game.