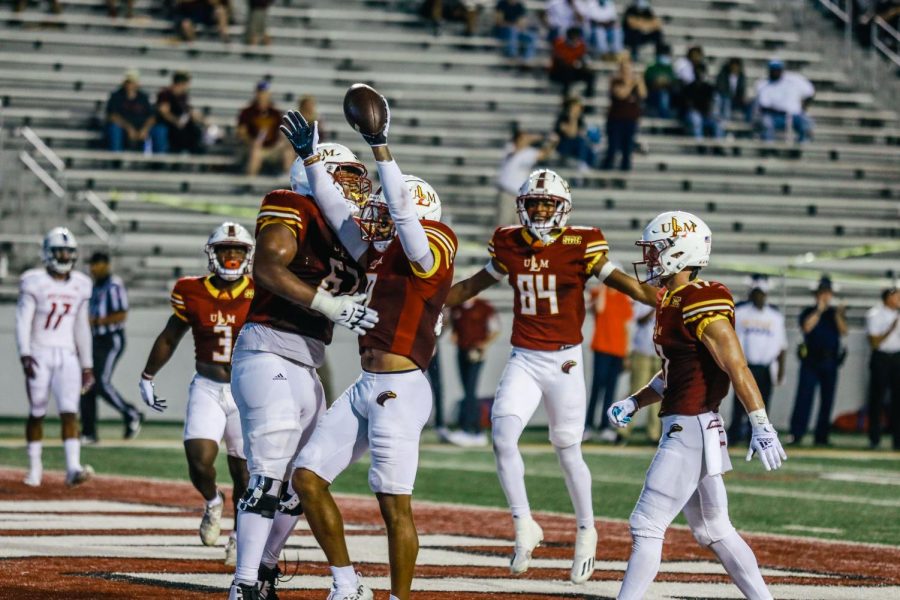 He might not have been on the Homecoming court, but quarterback Chandler Rogers deserves a crown for his efforts in ULM’s 41-31 win over South Alabama.

Rogers became the first ULM quarterback with four passing touchdowns in a game since 2017.

The ULM offense had their best overall performance of the season. Head coach Terry Bowden felt that it was the first time his offense absolutely outplayed the opposing team.

The Warhawks put up 555 yards of offense with 186 yards rushing and 369 yards passing.

South Alabama’s offensive game plan was simple but effective in the first half: Get the ball to their shifty tight end Jalen Tolbert. Tolbert nabbed 10 catches for 155 yards receiving and scored two touchdowns in the contest.

ULM responded with an aerial assault.

The offense needed spark to pull out in front of the Jaguars early on. Rogers connected with wide receiver Jared Sparks from 12 yards out for his first passing touchdown of the night.

Wide receiver Boogie Knight has extended drives and made spectacular plays all season. A week after making a SportsCenter highlight reel Knight reached the end zone for the first time as a Warhawk with four seconds left in the first half.

The two teams were looking for a player to step up and steal the momentum. The Warhawks found it in the hands of wide receiver Will Derrick.

On the second play of the drive, Rogers completed a pass to Derrick who paraded through the Jaguars secondary for an 81-yard touchdown and give ULM a lead they would ride out for the remainder of the contest.

After struggling with giving up chunk plays all night the defensive unit arrived in the second half. The Warhawks held the Jaguars scoreless for the final 21 minutes of the game.

The defensive revival was capped off with safety Nick Roberts intercepting the Jaguars with 18 seconds remaining in the game. However their impact on the contest began with the start of the second half.

South Alabama’s punter was well-rested by the time he punted for the first time in the game. The Jaguars did not punt until the third quarter, but ULM made this a reoccurrence with three-straight three-and-outs.

The Warhawks finished with three takeaways, something they’ve done four times this season.