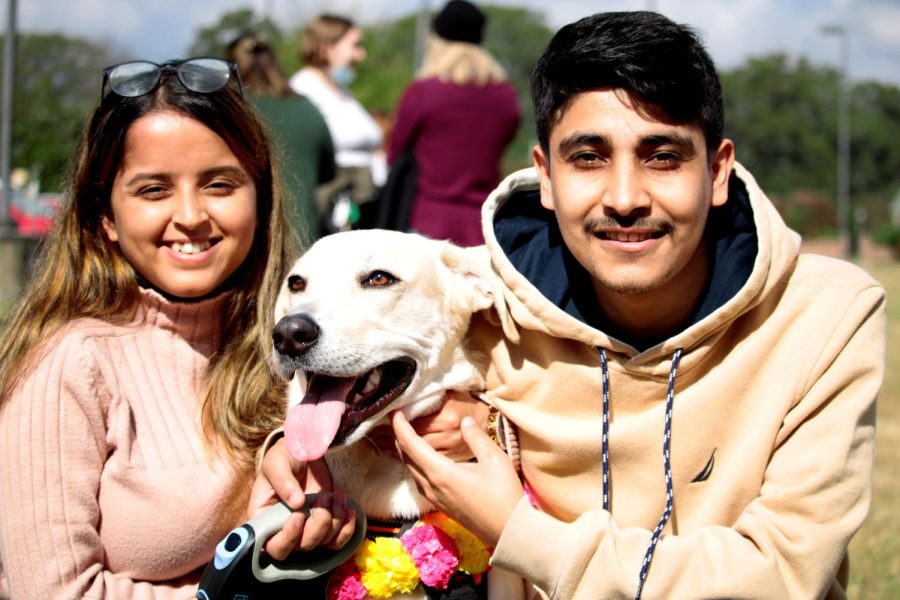 Nate Cromwell sat on the grass muttering thankful praises to his dog as he affectionately applied red tikka powder to her forehead at the Kukur Tihar Dog festival.

The Tihar Dog Festival is hosted by the International Students Association as a way to celebrate the Nepali Kukur Tihar festival that is held annually on the second day of the five-day festival.

Tihar is the festival of light as it signifies the triumph of light over darkness, or good over evil.

Gina White, the director of International Programs and Multicultural Affairs, oversaw the execution of the festival and thought the turnout of the event was impressive.

“These kinds of events are important because our international students are our treasure here on campus so it is only fitting that we not only get to share our culture with them, but we get to learn about their culture while they are here,” White said.

Nate Cromwell, a member of the Monroe community and a friend of a faculty member, attended because of his love for the Tihar festival and similar cultural celebrations.

“The event was brilliant. The hosts did a good job—they made sure to have enough space for the dogs and had everyone registered,” Cromwell said. “From the inception to the actual execution of the event was well done.”

Manish Katuwal, the public relations officer of ISA, emceed the event while explaining the cultural significance of the Kukur Tihar festival and demonstrating the way dog owners could worship their dogs.

“To me, this event is very meaningful because it gives dog owners a chance to appreciate their dogs for their friendship, companionship and the various services they provide for us,” Katuwal said. “There is a also religious belief that people worship their dogs to please Lord Yama, the god of death. This is because dogs are regarded as messengers of Lord Yama and pleasing the messengers of Lord Yama means having a long life.”

“I heard about the event online on social media, so I came out to volunteer for the event today,” Fourdraine said. “I think the event was nice, especially for the dogs and their owners. It was a good opportunity for them to come out, bond and learn more about each other.”

The bonding between owners and their dogs was furthered through a goody bag that was sent home with all dogs that contained treats and toys.

This was to promote bonding while also rewarding the dogs.

Not only were dogs at the festival rewarded,  but many dogs around the community will benefit from the festival due to donations that were collected.

White said this year they tried to incorporate the community more through service and involvement with things such as a donation box in which proceeds went to local dog shelters.

“Just like we provide community service to humans, it’s important that we look out for our fur babies as well,” White said.