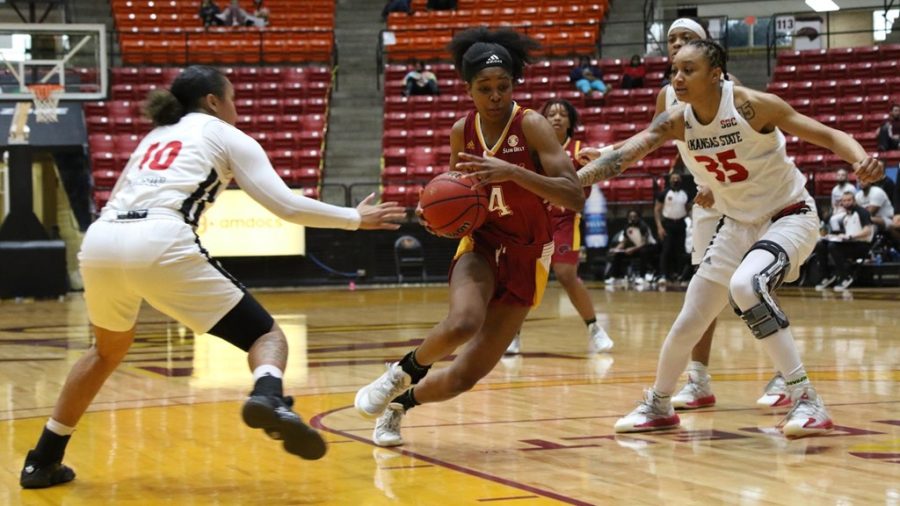 If the Warhawks wanted to prove that they have stepped up from last season, winning by more than twice their opponent’s score was an excellent start.

Last Monday ULM defeated the Millsap Majors 95-40 in a home exhibition matchup. This was ULM’s only preseason action before their season-opener at Grambling this Tuesday.

“We wanted to apply pressure defensively, and we did that in both the full and the half court,” ULM head coach Brooks Donald Williams said. “We wanted to push the basketball and we certainly did that.”

The Warhawks contested every shot and held Millsaps to just 20.9% shooting.

ULM forced the Majors to commit 40 turnovers in the contest. Bre Sutton collected seven of ULM’s 24 steals against the Majors.

The Warhawks capitalized to the fullest extent as they recorded 44 points off of turnovers.

The Majors could not overcome the Warhawks pressure. Only two players on Millsaps recorded more than five points.

At one point, ULM lead by as much as 58 points.

Rebounding was key in their victory as well. A ULM squad that struggled at getting boards last season recorded 51 rebounds.

Offensive boards gave ULM a second chance at life. Misses shots were caught off the glass 21 times and accounted for 19 second chance points.

Williams gave praise to her team for their all-around control, stating that she “loved the tempo” of the game.

The Warhawks held Millsaps to just two baskets in the first quarter of play while ULM made 11.

Even with the 3-point shot becoming more popular, ULM kept it traditional as they scored 42 points in the paint.