ULM stalls out in San Marcos

Warhawks offense held to 3 points in the 2nd half 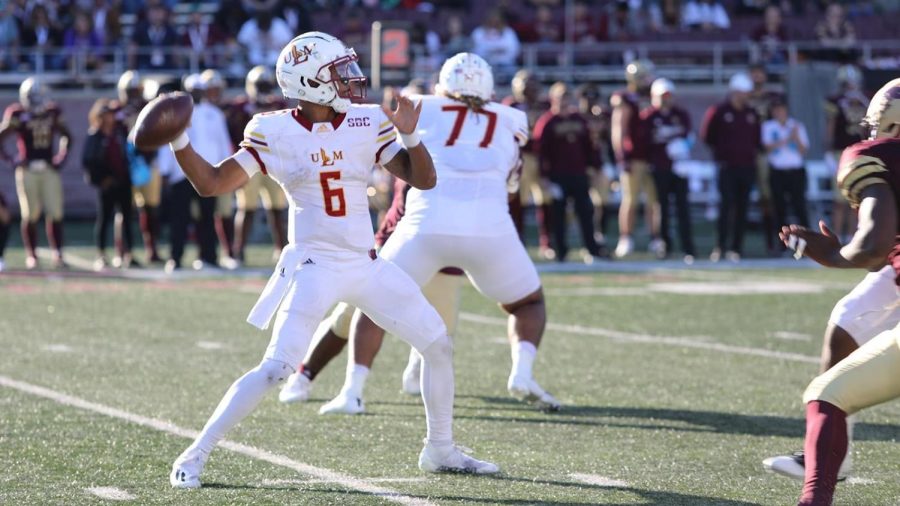 A few crucial mistakes and an inconsistent performance kept the Warhawks from a key win on the road. ULM fell to the Texas State Bobcats 27-19.

Consistency was a major issue for the Warhawks. Where the defense struggled in the first half the offense was stifled after halftime.

“In the second half, the defense tightened up, but the offense made no big plays,” head coach Terry Bowden said.

With a chance to score at the end of the half, ULM made a costly error.

Quarterback Chandler Rogers completed a pass to a receiver who was unable to make it out of bounds to stop the clock.

With no timeouts ULM missed out on a field goal opportunity before halftime.

“We should have got a field goal there but we couldn’t get out of bounds,” Bowden said.

The score stood 20-16 with Texas State in the lead.

After initially stalling on the opening drives the two teams’ offenses woke up and traded scores.

The Bobcats struck first with a field goal by Seth Keller.

The Warhawks got on the board with an Andrew Henry rushing touchdown. Following the score, kicker Calum Sutherland’s extra point was no good.

Texas State would respond with two straight touchdown drives which included a 49-yard touchdown pass to Javen Banks from Tyler Vitt and a 1-yard touchdown run by Caleb Twyford.

The Warhawks kept pace with two drives resulting in 10 points including a 10-yard rushing touchdown by Rogers and a 52-yard field by Sutherland.

The Warhawks opened up the second half with a field goal drive which made it a one point game. Past that point both defenses stepped up and both teams were held scoreless until late in the 4th quarter.

After two failed 4th down conversions, the Warhawks gave up a late touchdown that actually played out in ULM’s favor. Instead of running the clock down, Texas State gave the ball back to ULM with just an eight point lead.

Bowden said this sequence “gave us a chance.”

However, ULM was unable to capitalize, and after another failed 4th down attempt, the Warhawks would lose the game 27-19.

Chandler Rogers would finish the game completing 28 out of 43 passes, throwing for 262 passing yards with no touchdowns and no interceptions. He  also finished with 52 rushing yards on 23 carries, and would score a rushing touchdown. He was also sacked five times.

Sutherland would make another 50-yard field goal, but he also missed his first extra point of the season.